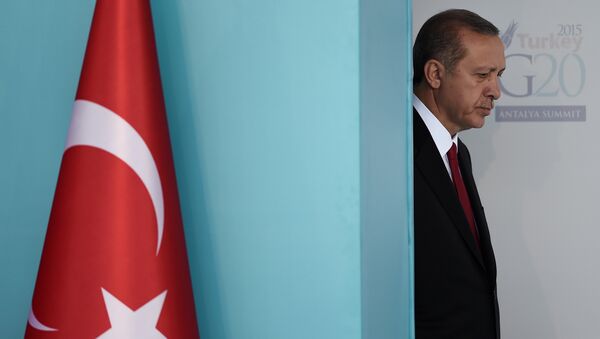 © AFP 2022 / OZAN KOSE
Subscribe
With the United States lacking any coherent strategy on Syria, Turkey, its main regional ally, has been given a "complete carte-blanche" to do virtually whatever it wants, from providing direct support for terrorists operating in Syria to profiting off the Daesh (ISIL) trade in stolen oil, Armenian online news resource 7or.am suggests.

Erdogan's Oil Plot: Evidence Continues to Mount Against Turkish President
The online newspaper's analysis, recently translated and republished by WhatTheySayAboutUSA.com, explains that when it comes to the ongoing military conflict in Syria, Ankara is Washington's primary ally, but that the alliance may not be a force for good.

"The USA has no allies fighting 'on the ground' in Syria," the paper notes. "Washington has tried setting up support for the so-called Free Syrian Army – but as it subsequently turned out, half-a-billion dollars'-worth of American aid went toward setting up a pro-American army of just…54 men. In reality, all of this aid [ended up being] delivered into the hands of the very terrorists against whom the Free Syrian Army were supposed to have been fighting…And indeed, [the FSA itself was] fighting shoulder-to-shoulder with the al-Nusra Front, an organization which is fighting the Americans."

"So the result," the editorial suggests, "is that American taxpayer dollars are going to the aid of America's foes – the Syrian branch of al-Qaeda."

"The US," 7or.am notes, "is also trying to collaborate with the Kurds in Syria –but this kind of collaboration sticks in the craw of the US's main ally – Turkey. It is a tangled web that they attempt to weave. To cut a long story short, the US doesn't have any clear tactics in Syria. Their strategy, though, is very obvious – to brush off Russia's military successes, to depose Assad, and form a puppet Sunni state, and only then think about fighting with Daesh and any remaining terrorist groups."

US Weakness Drove Turkey Out of Control - Former CIA Official
"Within this American strategy, Turkey has been given a complete carte-blanche. Washington quietly looks the other way while President Erdogan does his deals with Daesh. When it comes to Erdogan, it comes down to a policy of 'he may be a low-life, but he's our low-life,'" the paper notes, paraphrasing a famous remark by Franklin Roosevelt about Nicaraguan dictator Anastasio Somoza Garcia.

This is evidenced, the 7or.am editorial suggests, by the fact that "in response to Russia's accusations about Erdogan's oil smuggling –backed up with irrefutable evidence – the US State Department replied that contraband oil from Daesh-controlled areas is reaching Turkey only in insignificant quantities." This seems to suggest, the resource notes, "that if Turkey is providing support for terrorists only in insignificant quantities, the US sees no problem in it. It's all very similar to the American theory that there are 'good' and 'bad' terrorists."

According to the online paper, the fact that Washington looks quietly on as Ankara cozies up to Daesh terrorists "means that the interaction of the USA, the terrorists, and Turkish government-sponsored terrorism is operating like a mutual club. Who will end up rubbing out the others isn't yet clear. But what is clear is that millions of people are suffering in agony as a result, terrorist shockwaves are felt around the globe, 224 Russian tourists were shot out of the sky over the Sinai desert, and rock fans in Paris were shot down by terrorist thugs."

"What's become apparent," the editorial suggests, is that willingly or unwillingly, "Obama, Erdogan, and Daesh leader Abu Bakr al-Baghdadi are all part of one team in the battle against Russia and Assad. If this were not the case, the Obama administration would have to shut down the sources of financing which keep the terrorists operational. But what we actually see them doing is the opposite – the US imposes financial sanctions against Russia – the leading nation in the global fight against terrorism, while at the same time protecting the 'insignificant' support which Turkey provides to the terrorists."

'Moderate' Islamism? Washington, Brussels Playing With Fire in Syria, Iraq
Ultimately, the news resource warns, "whether they want to or not, the US is becoming the world's leading sponsor of international terrorism. Of course, it's obvious that once they have outlived their usefulness, the US will drop both Daesh and Turkey, after they have no moral or material resources left to offer –but not before they've fulfilled their roles…"

"This," the article concludes, "is what you get from a New World Order based on monopolies, and shorn of all international checks and balances. Russia has thrown down the glove to this New World Order. What the final result will be, only time will tell."