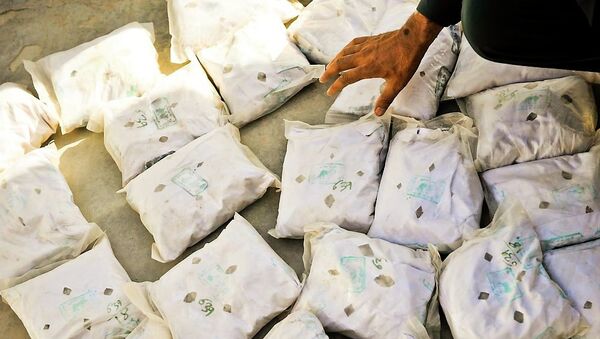 MOSCOW (Sputnik) – Earlier on Tuesday, Viktor Ivanov said that Russian and Afghan drug police confiscated more than 600 kilograms (over 1,300 pounds) of opium in the province of Baglan in December in a joint operation.

“The cargo traveled along the route of Badakhshan-Doshi-Bamiyan-Herat, then further through Iran and into Turkey, where the opium was processed in well-equipped laboratories … into high quality heroin, and then was to be sent to Europe and Russia,” Ivanov said during an anti-narcotics committee meeting.

Daesh is receiving between $200 million and $500 million annually from smuggling Afghan heroin into Europe, he said.

Large Volumes of Afghan Heroin Transit Turkey to Balkans, Further to EU
“According to our figures, the amount of revenue could be from $200 to $500 million annually,” Viktor Ivanov told journalists, adding that Turkey was used as a transit country for the deadly drug.

Last week, Ivanov said that large shipments of Afghan heroin were being transited through Turkey into the Balkan states and on into the European Union. According to him, the drugs from Afghanistan generate profits estimated at $150 billion annually for the people involved in the operations with them.