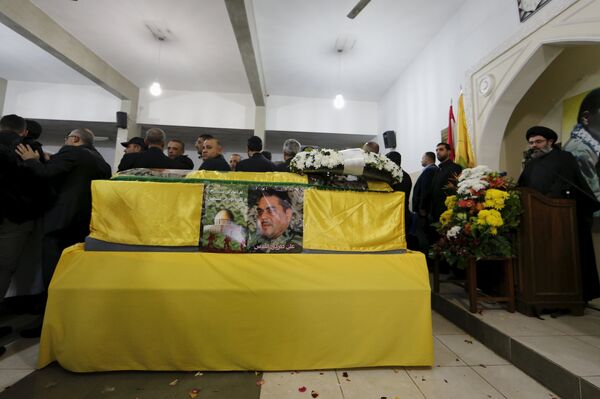 © REUTERS / Jamal Saidi
Subscribe
The insurgent Free Syrian Army (FSA) was not involved in the murder of a senior member the Lebanese Shiite Hezbollah organization, Samir Kuntar, near the Syrian capital of Damascus, one of FSA's commanders told Sputnik on Monday.

Hezbollah Holds Israel Accountable for Assassinating Group's Activist
CAIRO (Sputnik) — On Sunday, Kuntar was killed in an airstrike that targeted a residential building in Jaramana, a suburb south of Damascus. According to Hezbollah, Israel was behind the attack. On Monday, a militant group, allegedly part of FSA, released a video claiming that their "secret group" was responsible for killing of the Hezbollah militant.

"Jaramana is completely under the control of the [Syrian] government intelligence, we are unable to reach it. Actually, in principle, we have no 'secret groups' for special operations, which might have claimed responsibility for the murder," Hussam Awak of FSA said.

He added that such an operation was beyond the capabilities of the FSA, something the scale of destruction on the ground proves.

Samir Kuntar was a former guerrilla fighter, who participated in the armed Galilee onslaught during the war between Israel and Lebanon, in which four Israelis were killed.

In Israel, Kuntar was sentenced to life in prison, and served nearly 30 years there, but was released in 2008 as part of a prisoner swap with Hezbollah.

Hezbollah, was established in the 1980s as a paramilitary and political organization originating in Lebanon's Shiite population. The group aims to end Israel's occupation of Lebanon.

The Free Syrian Army is fighting against forces loyal to the Syrian President Bashar Assad, while Hezbollah has been assisting Damascus in the fight against both moderate rebels and extremists occupying Syria.