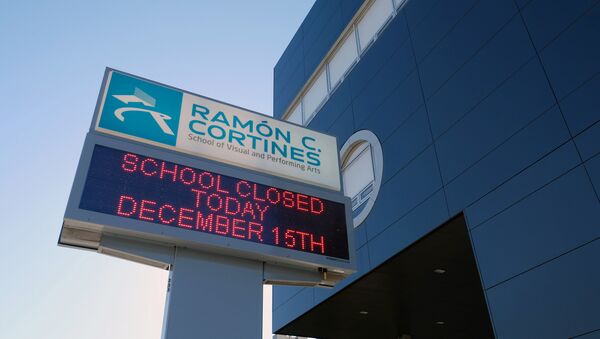 © AP Photo / Richard Vogel
Subscribe
The Los Angeles Unified School District (LAUSD) on Tuesday closed all of its campuses after officials received a “credible threat” of violence involving backpacks and packages left at campuses. A similar threat was received in New York City, though schools there did not close. US officials later said the threat looked to be a hoax.

"While we continue to gather information about the threat made against the Los Angeles and New York School Departments, the preliminary assessment is that it was a hoax or something designed to disrupt school districts in large cities," said Representative Adam Schiff (D-Burbank), the ranking member of the House Permanent Select Committee on Intelligence. "The investigation is ongoing as to where the threat originated from and who was responsible."

The Los Angeles district is the second-largest in the country with more than 700,000 students at more than 900 schools.

The threat was delivered via an email sent to an LAUSD school board member, the Los Angeles Times reported. The email was traced to an IP address in Frankfurt, Germany, but law enforcement said that the person who made the threats could have masked their location.

Authorities said they planned to search all of the district’s schools. The LAPD and FBI are assisting in the investigation.

"I think it's important to take this precaution based on what has happened recently and what has happened in the past," LAUSD Superintendent Ramon Cortines said, alluding to the recent terror attack that left 14 people dead in San Bernardino, about an hour from Los Angeles.

There also was a threat made to New York City schools, but authorities there said it was not credible and that they were concerned about overreacting. It is unclear if the two threats are connected.

"These threats are made to promote fear… we cannot allow us to raise the levels of fear," New York City Police Commissioner William Bratton tweeted.

LA officials said the threat was aimed at numerous but unspecified campuses. As a result, they made the decision to close all campuses for the day, the LA Times reported.

"The threat is still being analyzed," Los Angeles School Police Chief Steve Zipperman said. "We have chosen to close our schools today until we can be sure our campuses are safe."