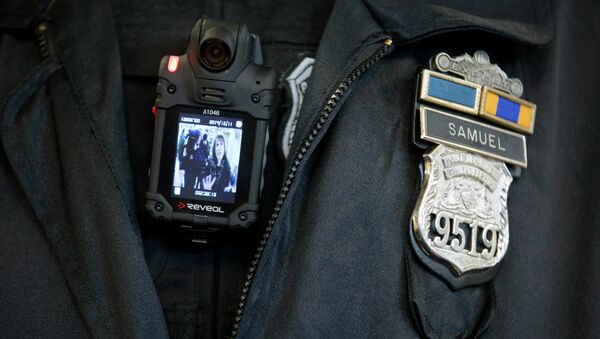 © AP Photo / Matt Rourke
Subscribe
Although President Barack Obama has pledged $263 million in federal grants to fund body cameras for police departments throughout the country, some still feel the effort will do little to hold officers accountable if they engage in suspicious or unlawful activity.

Lisa Schreibersdorf, executive director of Brooklyn Defender Services, points to the recent case of Laquan McDonald, a 17-year-old who was fatally shot last year by a police officer after he responded to a call about a man with a knife in an op-ed on the Huffington Post

Doubts About Storage of Footage From Police Body Cameras
An officer’s dashboard camera captured footage of that incident. However, Chicago’s mayor and police commissioner struggled to keep those recordings away from the eyes of the public arguing the footage could interfere with the court case.

Following the efforts of journalists and lawyers, however, a judge finally forced city officials to release the video in November leading to the prosecution of Officer Jason Van Dyke for murder more than a year after the shooting.

“Many have suggested that the prosecution would never have come if the City had succeeded in keeping the video under wraps — an allegation that Cook County State's Attorney Anita Alverez denies, but nevertheless casts doubt on the ability or willingness of the police, prosecutors or even the City administration to hold individual officers accountable unless forced to do so,” Schreibersdorf explained to the Huffington Post.

Body Cameras Not to Eradicate US Police Racism: Former US Marshal
In many instances, city officials can fight to keep police body-camera footage from being seen by the public and defense attorneys.

In New York City, for example, body-camera recordings legally are categorized as an officer’s file making it difficult for defense attorneys to access it. Police Commissioner Bill Bratton has said that body camera footage would not be released to the public under any circumstances.

“That leaves us in the potential situation of receiving body camera footage only when it serves the NYPD and the prosecution, not when it exonerates our clients or incriminates an officer,” said Schreibersdorf. “Such a scheme favors neither justice nor accountability and is one that we, as public defenders, often the last line of defense against executive power, could never support.”