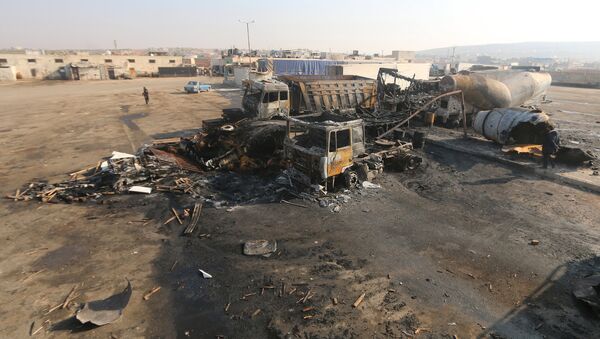 Major-General Hosam Al-Awak of the Intelligence Service at the Free Syrian Army has confirmed to Sputnik Arabic that they have the proof of crude oil purchases by Turkey from Daesh (also known as ISIL/ISIS) in Syria and Iraq.

Major-General Hosam Al-Awak has confirmed to Sputnik Arabic that the Free Syrian Army (FSA) has photos of the oil deals and contracts signed by a Turkish party to buy oil from Daesh (also known as ISIL/ISIS) terror organization, which controls large areas in Syria and Iraq. 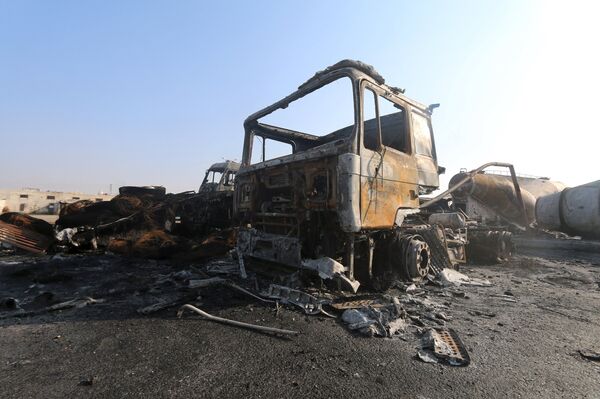 Damaged trucks are pictured after what activists said were air strikes carried out by the Russian air force, on a parking garage for cargo trucks in al-Dana town, near the Syrian-Turkish border in Idlib Governorate November 28, 2015
© REUTERS / Ammar Abdullah

“Since the very start of the Syrian crisis in 2011, Turkey has been supporting the Islamists (extremists) and terrorists in Syria in every possible way against moderate groups,” he added.

“We have photos of the contracts of oil deals signed between the Turkish party and Daesh… We also have photos of [buying] vehicles – Toyota cars bought by Qatar, which have the name of “al-ghanem” – [which] entered Syria along with armored vehicles used by militants of Daesh for their leaders’ transportation.”

Are You Sure About That? Why Erdogan Shouldn't Have Asked for Proof
“We noticed that extremist Islamic factions gain support from Turkey before the emergence of “Daesh”…. This support reached them through Qorsayah Mountain, near to Bawabet as-Salam on the Turkish-Syrian borders.”

The Major-General also explained that the Turkish intelligence service used these deals (signed with the extremist parties) for other purposes – it obtained facilities from those parties, so that they “could steal factories and laboratories in Aleppo for the benefit of the Turkish companies.”

Hosam Al-Awak noted that the Muslim Brotherhood in Syria was supervising these organizations and coordinating with them, in order to put an end to the Free Syrian Army and other moderate groups.

The Major-General stressed that his groups held the Head of the Turkish Intelligence Hakan Baydan accountable [for the deals] and added that they showed the evidence to their friends in the region and in the world, however, President Erdogan of Turkey insists on supporting extremism, Islamist parties and terror organizations in the region.

Putin: Russia Has Evidence Su-24 Shot Down to Protect Daesh Oil Deliveries
“We believe that Russia is the rational party in the world. In terms of the Syrian cause, Russians could cooperate better with all moderate parties and factions, including the Free Syrian Army.”

The officer said that he believes that the Russian intervention into Syria could achieve better results and promised to “maintain Russian interests in Syria in the future.”

This is only the latest evidence to come to light of Ankara's oil contacts with the jihadist group, which have been vehemently denied by Turkish President Recep Tayyip Erdogan.

Erdogan even vowed to leave office if any proof is provided that Turkey has been buying oil from the terrorist group.

His comments, in turn, came in response to President Putin's remarks that Moscow has evidence that the Su-24 was shot down by Turkey to protect Daesh oil deliveries, and that oil from the fields it controls is being exported to Turkey on an industrial scale.