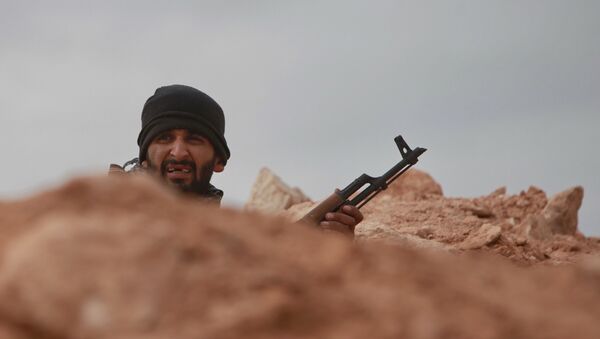 Libyan authorities are ready to coordinate efforts with Russia if it starts fighting Daesh militants in Libya, according to the country's Prime Minister Abdullah al-Thani.

Moving Closer to Europe: ISIL Sets Its Sights on Expansion in Libya
In an interview with Sputnik, Libyan Prime Minister Abdullah al-Thani has signaled his country's readiness to coordinate efforts with Russia if it decides to fight Daesh, also known as the Islamic State or ISIL, on Libyan territory.

"We want Russia to enter the fight against ISIL in Libya, and the Libyan government is ready to coordinate steps at the highest levels for the purpose," Al-Thani said.

He added that Libyan authorities welcome initiatives from any country which provides support and helps restore stability in Libya.

According to him, Libyan authorities expect the arrival in their country of a large number of Daesh militants who fled the Russian air strikes in Syria, with many of them already in Libya.

.@Hakimcur Yes. We are fighting #ISIL #Daesh in @Syria & #Iraq & will do so in #Libya as well. We have to work together to defeat #terrorism

The Prime Minister mentioned an array of Daesh leaders who he said have arrived in Libya in the past and who come from Algeria, Syria and Afghanistan.

Libya is now undergoing through a political gridlock that came after the overthrow, public lynching and execution of Muammar Gaddafi during the armed conflict in 2011.

Libya Must Form Unity Government to Stop ISIL Threat‏ - France
A standoff has emerged between the legally-elected parliament, based in the eastern Libyan city of Tobruk, and the pro-Islamic General National Congress in the capital Tripoli.

A number of areas in Libya remain out of control of the country's authorities.

On September 30, more than fifty Russian aircraft, including Su-24M, Su-25 and Su-34 warplanes, commenced precision airstrikes on Daesh targets in Syria at the behest of Syrian President Bashar Assad.