Republic of Srpska Referendum to Be Response to Western Violence 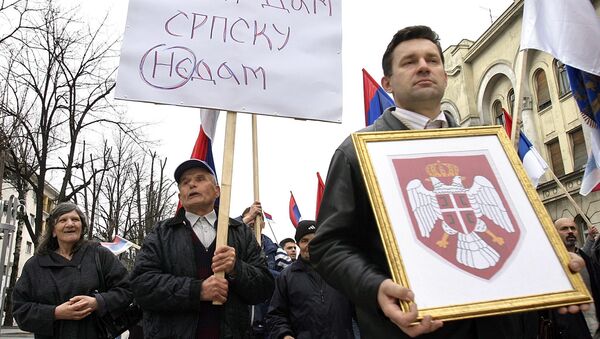 © AFP 2023 / STR
Subscribe
International
India
Africa
Milorad Dodik, the president of the Republic of Srpska said that the law of the republic was violated by the international community, especially the Western states and Turkey.

Déjà Vu in the Balkans
BELGRADE (Sputnik) — A referendum in the Republic of Srpska on the abolition on its territory of the Bosnian Supreme Court will be a response to unlawful Western violence, the president of the republic said on Wednesday.

The Republika Srpska is an administrative entity in Bosnia and Herzegovina, which was established in 1995 following a three-year civil war. The conflict escalated between the Serbians, the autonomous Bosnian Muslims and the Croats. As local authorities and law enforcement were weak at the moment of the conflict, the intentional armed forces were engaged, and NATO conducted operations against the Bosnian Serbians.

"We are witnesses of the violations of law and unlawful violence carried out under the auspices of the part of the international community, especially the Western states and Turkey. Through the High Representative for Bosnia and Herzegovina and his office it affects the stability and prevents inner ethnic reconciliation after the 1992-1995 Civil War," Milorad Dodik told RIA Novosti.

The civil war ended by the Dayton ceasefire agreement signed in the United States. The incumbent government is considering prospective independence from Bosnia and Herzegovina.

West Refuses to Recognize Serbian Right for Independent Justice System
Initially, the referendum was scheduled for November 15. The residents of Republika Srpska were to decide on the termination of powers of the Bosnian judicial system in the Republika Srpska. The existence of a Judaical system over the entire territory of Bosnia and Herzegovina would allow the Bosnian Muslims to initiate a criminal cases against Serbs over episodes of the civil war, bypassing the judicial authorities of the Republika Srpska.

Earlier this year, High Representative for Bosnia and Herzegovina Valentin Inzko, who is responsible for controlling implementation of the Dayton Peace Agreement, said that the referendum violates the truce, and sent a corresponding letter to the UN Security Council, saying that the Republika Srpska has no jurisdiction to solve issues on the level of Bosnia and Herzegovina.

The Western senior officials were concerned over the possibility of the referendum, with some of them, including EU foreign policy chief Federica Mogherini, considering the precedent as a step toward the exit of the Serbs from Bosnia and Herzegovina.

In turn, Dodik said that the referendum would take place even if Brussels and Washington imposed sanctions against the Republika Srpska.