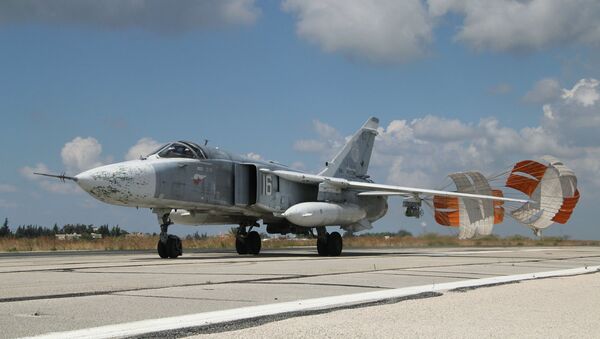 © Sputnik / Dmitry Vinogradov
/
Go to the photo bank
Subscribe
Turkey will likely launch a "damage limitation exercise" after it shot down a Russian aircraft it claimed had violated Turkish airspace, Dr. Martin McCauley, a senior lecturer at the University of London and a Russian analyst, told Sputnik Radio.

The downing of the Russian Su-24M bomber by Turkish warplanes "appears absolutely unnecessary," McCauley said. He expects Ankara to start a "damage limitation exercise" in the face of international criticism over the attack.

"Because practically everyone will condemn them and say 'Why did you do this? Why was it necessary to shoot down this plane?'"

​He suspects that the attack by Turkey, which is a NATO member, is an attempt by Ankara to bring the international organization deeper into the conflict in Syria.

Turkey has done little in the fight against the Islamic State, and has instead focused on its conflict with Kurdish separatists. The downing of the war plane, coupled with increasing links between Turkey and the Islamic State, will force Ankara to declare if it is committed to defeating Islamic State, McCauley said.

"I would see [Turkey] as basically playing a double game and hoping that NATO will come in and involve themselves more deeply in fighting ISIS. Because Turkey at present doesn't seem very, very keen to fight ISIS at all."

As an increasing number of foreigners passed through Turkey en route to Syria, the growing belief was that Ankara was sympathetic to conservative Islamists travelling to fight Syrian President Bashar Assad, who Turkey opposes. Adding to the suspicion have been reports that Turkish businessmen are dealing with Islamic State oil smugglers, putting millions in the terror group's coffers as Turkey takes a cut.

Would Turkey Act Without US Permission? – Daniel McAdams

"A lot of people in Turkey are doing very well out of the conflict in Syria, especially with ISIS in control of part of the territory," McCauley said.

Still, he added, Moscow cannot sever ties with Ankara over Tuesday's attack. For now, the Russian Defense Ministry has suspended military contact with Turkey over the plane downing, which President Vladimir Putin called "a stab in the back."

"So Russia, at the end of the day, cannot afford to fall out [with Turkey]," McCauley said. "It doesn't really have a choice here. It must, in fact, patch up this relationship and find out from Turkey why they did it and then find some solution to the problem and then say 'Let's make sure it doesn't happen in the future.'"

000000
Popular comments
Typical London doublespeak, forcing the victims to capitulate with an "I'm sorry we were up there doing our job which interferes with your criminal activity." Now did I get that right, or not?
marcanhalt
25 November 2015, 04:05 GMT6
000000
marcanhalt, You have it right. That's how bullies think. They can "justify" anything they do, no matter how unacceptable, but have the exact opposite rules for everyone else.
jas
25 November 2015, 04:41 GMT3
000000
Newsfeed
0
New firstOld first
loader
LIVE
Заголовок открываемого материала
Access to the chat has been blocked for violating the rules . You will be able to participate again through:∞. If you do not agree with the blocking, please use the feedback form
The discussion is closed. You can participate in the discussion within 24 hours after the publication of the article.
To participate in the discussion
log in or register
loader
Chats
Заголовок открываемого материала
Worldwide
InternationalEnglishEnglishMundoEspañolSpanish
Europe
DeutschlandDeutschGermanFranceFrançaisFrenchΕλλάδαΕλληνικάGreekItaliaItalianoItalianČeská republikaČeštinaCzechPolskaPolskiPolishСрбиjаСрпскиSerbianLatvijaLatviešuLatvianLietuvaLietuviųLithuanianMoldovaMoldoveneascăMoldavianБеларусьБеларускiBelarusian
Transcaucasia
ԱրմենիաՀայերենArmenianАҧсныАҧсышәалаAbkhazХуссар ИрыстонИронауОssetianსაქართველოქართულიGeorgianAzərbaycanАzərbaycancaAzerbaijani
Middle East
Sputnik عربيArabicArabicTürkiyeTürkçeTurkishSputnik ایرانPersianPersianSputnik افغانستانDariDari
Central Asia
ҚазақстанҚазақ тіліKazakhКыргызстанКыргызчаKyrgyzOʻzbekistonЎзбекчаUzbekТоҷикистонТоҷикӣTajik
East & Southeast Asia
Việt NamTiếng ViệtVietnamese日本日本語Japanese俄罗斯卫星通讯社中文（简体）Chinese (simplified)俄罗斯卫星通讯社中文（繁体）Chinese (traditional)
South America
BrasilPortuguêsPortuguese
NewsfeedBreaking
12:21 GMT‘Disappointed’ Senate Dems Blocked From Attaching Immigration Reform to Biden's Massive Budget Bill
12:16 GMTIt's a Girl: Compromised Royal, Prince Andrew, Welcomes New Grandchild
11:52 GMTElection Commission: United Russia Ahead With 49.82% in Parliamentary Vote as 99% of Ballots Counted
11:49 GMTUK Crisis: Why Are Gas Prices Surging, Leading To Massive Spike In Cost Of Energy To British Homes?
11:30 GMTPoland to Boost Defence on Border With Belarus by 500 More Troops
11:24 GMTOne Person Killed, Four Injured in Freight Trains Collision in Guinea, Reports Say - Photos
11:23 GMTIran Dismisses NYT’s Account of Mossad Assassination of Nuclear Scientist as Just ‘Newspaper Report’
11:20 GMTLabour MP Seeks Party Position Clarity Over Transgender Issues Amid Online Threats
11:16 GMTKosovo Bars Serbian-Registered Vehicles From Entering
11:15 GMTBoris Johnson to Face-Off with Amazon Founder Jeff Bezos Over E-Commerce Giant’s Low UK Tax Payments
11:04 GMTAll About Decision Making: PSG's Pochettino Explains Why He Substituted Messi During Match With Lyon
11:02 GMTIndia: 19-Party Alliance Begin Countrywide Protests Against Narendra Modi Government
10:51 GMTFormer UK Prime Minister Urges Rich Nations to Send COVID-19 Vaccines to Poor Countries
10:40 GMTAlia Bhatt's New Ad Stirs Uproar for Painting Hindu Ritual 'Kanyadaan' as 'Regressive'
10:36 GMTNorth Korea Calls AUKUS Submarine Deal 'Dangerous Act' Fueling Arms Race
10:16 GMTHotel Rwanda Hero Convicted of Terrorism Charges After Being 'Kidnapped' From Dubai
10:08 GMTBoeing Begins Probe After Empty Tequila Bottles Found Aboard Air Force One Plane Under Construction
09:59 GMTCristiano Ronaldo Reacts to Manchester United's Win Over West Ham: 'Let's Go, Devils!'
09:55 GMT'Smacks of Racism': Anger in India as UK Refuses to Relax Rules for Those Vaccinated With Covishield
09:43 GMTElon Musk Favours 'Some Amount' of Space Cooperation With China