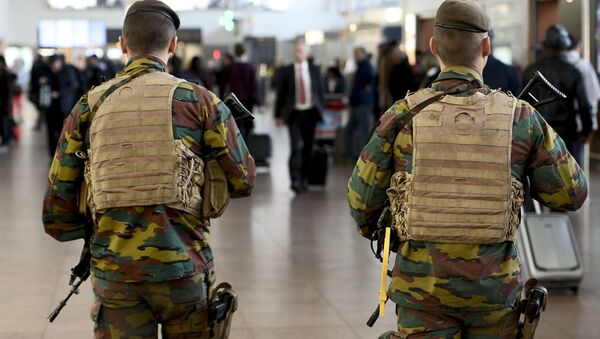 © AFP 2021 / DIRK WAEM
Subscribe
Belgium’s OCAM crisis center has raised the terror alert level in Brussels to the highest possible grade for the first time ever.

"Following a new assessment of the OCAM performed this Friday, 20/11, in the evening, the terror alert level rose to level 4…for the Brussels Region. Level 3 [alert] continues to apply to the rest of the country," the crisis center said in a statement, warning of a "serious and imminent threat."

OCAM recommended that Brussels residents avoid crowded public places, such as train stations and airports, refrain from using public transport and do not attend concerts and other mass events.

On Friday, Belgium charged an unidentified man with terrorism offenses in connection with the November 13 Paris attacks.

According to Belgian prosecutors, nine people were detained on Thursday in connection with the terrorist acts in the French capital, which took the lives of at least 129 people, injuring 350 others.

The attacks were staged in several locations across Paris, including the Stade de France stadium and the Bataclan concert hall.

Following the tragedy, Belgian police carried out a series of anti-terrorist operations detaining a number of people in Brussels, suspected of links to the Paris attacks.

Belgium's terror alert level was raised from level 2 to level 3 on Monday.

The alleged ringleader of the Paris attacks, Belgium-based Abdelhamid Abaaoud, was killed in a police raid in Paris on Wednesday.