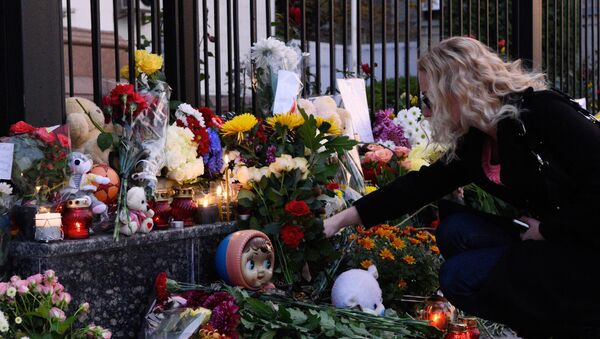 MANILA (Sputnik) – The leaders of the Asia-Pacific Economic Cooperation condemned in the summit’s declaration the terrorist acts that occurred in Paris, Beirut, as well as the bombing of the Russian A321 passenger jet over Egypt.

"Under the shadow cast by the terrorist attacks in Paris, Beirut, and against Russian aircraft over the Sinai, and elsewhere, we strongly condemn all acts, methods, and practices of terrorism in all their forms and manifestations. We will not allow terrorism to threaten the fundamental values that underpin our free and open economies," the declaration reads.

The leaders of the APEC summit also expressed commitment to boost "international cooperation and strengthen solidarity in fight against terrorism."

The leaders reiterated their commitment to finally implementing the Free Trade Area of the Asia-Pacific (FTAAP).

Leaders of 21 APEC member states are meeting in Manila November 18-19. One of the main topics of the discussion was China-promoted FTAAP that would include all APEC members, unlike the controversial US-led Trans-Pacific Partnership (TPP), which would comprise only 12 Pacific Rim nations.

"We reiterate our commitment to achieve the Bogor Goals of free and open trade and investment by 2020 and to the eventual realization of the Free Trade Area of the Asia-Pacific (FTAAP). We appreciate the work by our officials to ensure that regional trade agreements complement and strengthen the multilateral trading system.

We welcome the progress made by many APEC members in completing their respective processes to submit the instruments of acceptance to the WTO Trade Facilitation Agreement, which will reduce the cost of trading across borders."

Xi Jinping Urges to Boost FTAAP Process
The Asia-Pacific region, including parts of East Asia, South Asia, Southeast Asia, and Oceania, is estimated to account for some 40 percent of the global economy.

FTAAP has been under discussion among Pacific Rim nations for years. In 2014, China proposed a roadmap for translating APEC’s vision of the deal into reality, which provided for a collective strategic study of the pact, to be concluded by the end of 2016.

Negotiations on the precise wording of the TPP document was finalized last month between members, including the United States, Japan, Australia and New Zealand.

The APEC leaders endorsed the primacy of the multilateral trading system under the auspices of the World Trade Organization.

To further reinforce our commitment on the occasion of the 20th anniversary of the WTO, we have decided to issue a separate statement supporting the multilateral trading system and the 10th Ministerial Conference of the WTO," the declaration reads.

The two-day event kicked off in Manila on Wednesday, November 18.