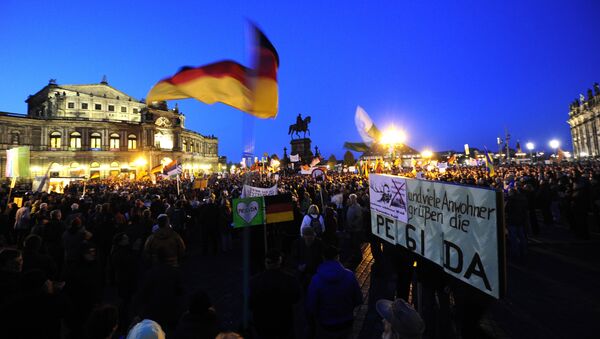 © AFP 2021 / ROBERT MICHAEL
Subscribe
The recent terrorist attacks in Paris play into the narrative of European far-radical parties that call for counter "Islamization". Unless liberals provide their own plan in response to the European crisis, they risk losing the argument completely, professor Matthew Goodwin wrote in his article for think tank Chatham House.

France Reluctant to Host More Migrants in Fear of Islamization – Lawmaker
"This is war. Nothing else," Geert Wilders, leader of the Dutch Party for Freedom, tweeted after news came out about the recent terrorist atrocities in Paris. Like many radical populists, Wilders has long warned of the Islamist threat and the "Islamification" of Europe.

"Since 9/11 the so-called 'Eurabia thesis' has become a central reference point for not only the hard right but also some mainstream voices. It emerged long before the arrival of Islamic State of Iraq and Syria (ISIL), or the refugee crisis, but these events are bringing the idea to new audiences," the article read.

According to the theory, there is a conspiracy underway to "Islamize" Europe, through terrorism, forced migration or high birth rates among Muslims living in Europe. Far-right radicals say established politicians are too weak to solve the crisis.

It is obvious that a majority of Muslims in Europe openly refute fanaticism and violence which proves the radical conspiracy theory wrong, the author wrote. However, unlike a few years ago it is no longer so easy for liberals to dismiss the idea as an obsession.

The author pointed out that in recent years anti-Muslim parties and movements have advanced to leading positions in many European countries, including Austria, Sweden, Switzerland and France.

"The claims among followers of these groups, that Islam is incompatible with Western values and that Europe’s weak leaders are unable to meet this threat, are by no means the only reason for their support. But they are quickly becoming a central ingredient. And unlike earlier years liberals now seem to be losing the argument," Goodwin wrote.

Radicals have been gaining support across Europe because they recognized that the public’s anxiety over migration, refuges and Islam are as much about threats to their cultural security and values as they are about welfare states and distribution of resources, the author underscored.

Anti-Refugee Sentiment Mirrors Pre-WW2 Attitudes to Jews Amid Terror Debate
Despite the fact that radicals may be wrong, they are offering a clear picture of what has gone wrong and what should be done.

As for the recent migrant crisis in Europe, while politicians could not find a way to tackle the problem, radicals were gambling on the argument that the refugee influx would bring terrorism to Europe. And they were right, the author wrote.

"Soon, public opposition to accepting refugees will harden. Wilders and his brethren will make hay," the author warned.

He also criticized liberals for taking no serious steps to propose their vision of the problem and a proper response to the crisis.

"Unless liberals can set out their own vision for how Europe can tackle its multiple crises, of which violent Islamism is only one, they risk losing the argument completely and all that this would entail," he concluded.