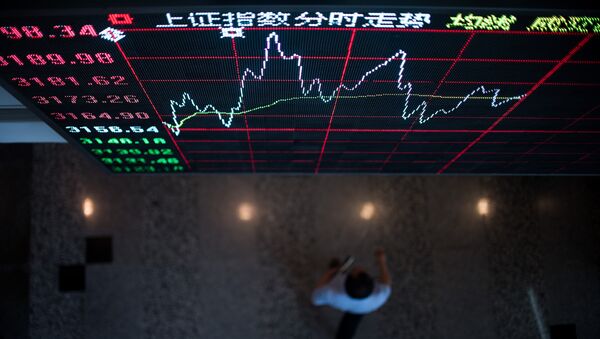 Mainland China plans to expand its assets trading to international investors via Hong Kong, increasing quotas for the existing ‘Stock Connect’ and opening another similar scheme for the Shenzhen bourse.

Kristian Rouz – Bucking the trend of economic rapprochement with Washington, the Chinese authorities announced their planned expansion of the Shanghai-Hong Kong ‘Stock Connect’ scheme, allowing a larger volume of the mainland’s financial assets to be traded internationally through the bourse in Hong Kong. Initiated late last year, the ‘Stock Connect’ scheme allows international investors to buy into mainland China’s assets circumventing the excessive administrative barriers they would otherwise encounter. So far, ‘Stock Connect’ has proven to be a reliable tool allowing capital to move freely in and out of mainland China.

As Beijing’s commitment to reform the nation’s economy and integrate into the global finance has become explicitly pronounced during the past year, the expansion of ‘Stock Connect’ is another step to liberalize the mainland’s money market, providing much-needed investment to a nation struggling to mend its growth machine.

According to a statement by Fang Xinghai, vice chairman of the China Securities Regulatory Commission (CSRC), Beijing is intending to expand the daily trading quota and the share trading cap via the Shanghai-Hong Kong Stock Connect.

The regulator also said it would streamline the implementation of the discussed Shenzhen-Hong Kong Stock Connect, a similar mechanism providing international investors with greater access to the mainland money market.

Chinese authorities’ implicit desire to ensure a net influx of capital when the ‘Stock Connect’ goes into full-scale operations.

Chinese Economist Predicts Another Global Financial Crisis Within 5 Years
However, so far it has worked in a slipshod manner.

After the Chinese stock markets crashed a massive 45% during the July-August meltdown, investment capital flight took place, including through the ‘Stock Connect’. Beijing had to intervene and freeze the sales of mainland assets.

According to some observations, ‘Stock Connect’ was hardly a success as any initial excitement was erased by market turbulence. ‘Stock Connect’ has “failed miserably,” Kevin Lai of Daiwa Capital Markets said. “The excitement only lasted six months,” and then the massive capital outflow eclipsed the initial enthusiasm over ‘Stock Connect’.

The excessive regulative measures imposed by Beijing during the summer stock meltdown are to blame. However, in the future, the mechanism may prove useful.

‘Stock Connect’ initiated constant consultations between the global financial enterprises and Chinese watchdogs, helping China in the ongoing opening up of the mainland's finances.

Will China Dumping US Bonds Undermine Global Finance?
“It may well give a better long-term foundation,” Pat Lardner of Irish Funds said.

Now that the situation has stabilized, with China actively expanding its offshore renminbi trading in London, while the IMF backed its reserve currency bid, the mainland might once again become a point of destination for many international investors.

According to the CSRC plan, the northbound quota is set to expand by 40% on its upper limit, while the southbound quota will increase by 37%. The watchdog’s statement falls in line with the recent IMF urge for China to further liberalize its money market if Beijing wants to see the renminbi among the world’s reserve currencies.

How soon the expansion of the Shanghai-Hong Kong ‘Stock Connect’ will happen, is yet unclear. It may happen this year, but, most likely, it is set for 2016.

“It’s feasible it (expansion of the ‘Stock Connect’) could be in 2015,” said Brendan Ahern of KraneShare, a China-related wealth management fund. “But with each passing day it becomes a lower probability.”

Meanwhile, the proposed opening of the similar Shenzhen-Hong Kong scheme is perhaps a more distant perspective. Nonetheless, it is likely to open before September 2016, when the IMF takes decision on the renminbi inclusion to its reserve-currency basket: the more liberalized money market in mainland China Washington will see, the better it is for the bid.