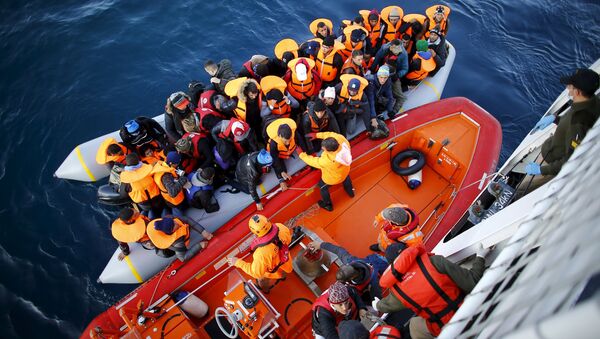 © REUTERS / Umit Bektas
Subscribe
Following the first mass drowning of refugees in Mediterranean waters in 2013, United Nations Secretary General Ban Ki-moon called on the international community to "take action to prevent such tragedies in the future."

In 2014, Amnesty International's director for Europe and Central Asia John Daluisen said "the priority must be to protect lives rather than creating an impenetrable fortress."

Everyone has the right to seek asylum & we ALL have an obligation to help. #RefugeesWelcome https://t.co/pTEcvRwx28 pic.twitter.com/0NVlw8hMXn

In October 2015, Director of Human Rights Watch Peter Bouckaert asked "what is the European Union doing?" after 26 men, women and children drowned trying to reach Greece.

Indeed, the EU has come under fire from NGOs, volunteer rescuers and human rights organizations for taking too long to act on their various pledges and promises to resettle asylum seekers fairly and increase the number of processing centers and border controls.

But after numerous mini summits, emergency summits and extraordinary meetings between EU leaders, they have only just agreed to deliver quicker on their promises and pledges to avoid what they refer to as a "humanitarian catastrophe."

"The EU has to do everything it can to avoid a humanitarian catastrophe as winter approaches," immigration minister Jean Asselborn told reporters.

Refugee and Eurozone Crises Lead to Calls for Two-Speed Europe
Nearly 800,000 refugees, asylum seekers and economic migrants have arrived in Europe already this year. The EU, after squabbling for months over asylum quotas, agreed to resettle 160,000 refugees from Greece and Italy.

So far, 147 asylum seekers have been relocated to Sweden and Luxembourg. Ten thousand people arrive by boat every day in Greece and still the European Commission waits for member states to reveal how many spaces they have allocated for migrants.

In their most recent meeting, ministers agreed "that all participating member states will speed up the relocation process."

They have said that before — and it appears member states may be nodding — but not listening.

EU leaders also recently agreed to increase its Frontex presence in the Aegean Sea — but member states have so far provided less than half of the 743 border staff requested by Frontex.

The EU has pledged US$18.6 million (€17m) to help Serbia and the former Yugoslav Republic of Macedonia cope with the escalating numbers of refugees treading the Western Balkan Route to reach northern Europe.

Yet recent reports reveal that refugees were repelled by taser guns on Macedonia's border with Greece.

UPDATE: Tense night in #Greece #FRYOM. With #Idomeni border closed for 1 hour,1000s tried to push through & were repelled with taser guns

The EC has also announced that it will give US$68 million (€62m) in humanitarian aid to support displaced Syrians. Commissioner Christos Stylianides said:

"We must continue to get humanitarian aid to Syrians in need as the coming winter will bring additional hardship to the most vulnerable. That's why the European Commission is taking action, getting lifesaving humanitarian aid to displaced Syrians inside the country and refugees in neighboring countries."

Pushed Back at The Border by the Bloc

Despite being warned a year ago not to create "impenetrable fortresses", fences are the norm on Bulgaria's border with Turkey, Spain's with Morocco, and Hungary's with Serbia.

According to a forthcoming report by Amnesty International (AI), 'Fear and Fences: Europe's Response to Keeping Refugees At Bay', Europe's policies and practices aim to prevent people from arriving, instead of offering protection provided to refugees and migrants under international and European law. 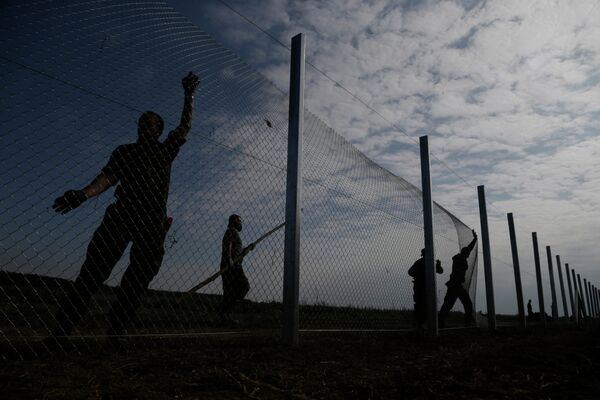 Hungarian soldiers work on a fence that is being built at the border with Croatia, near the village of Beremend, Hungary, Tuesday, Sept. 22, 2015
© AP Photo / Petr David Josek

Rather than stemming arrivals, this flawed approach, according to AI, is pushing people to take even more dangerous routes, and failing those in need of and with the right to asylum.

Three months ago German Chancellor Angela Merkel said: "We must tackle quickly the issue of immigration and in a European spirit — that means in a spirit of solidarity — and find solutions."

Two years into the refugee crisis — leaders are still holding meetings to work out how to avoid a "humanitarian catastrophe."

It's not just individual refugees and migrants who are being pushed back at and blocked at European Union borders.

At another meeting in Malta on 11 November, Europe is set to offer US$3.8 billion (€3.6bn) in funds to African nations in return for countries taking back economic migrants; potentially pushing back migrants on a mass scale as a collective bloc.

000000
Popular comments
E.U should give them a medical check up. Food and 20,000 Euros each to go back home. With supplies and tents.
cast235
10 November 2015, 18:03 GMT
000000
The grim reality is obvious. Europe is in danger of a major catastrophe, and has no remedy to satisfy the comfort, and peace of it's residing populations. It's leaders, led by the unthinking Angela Merkel sounding her welcome to Germany trumpet call, not at the behest of the German people, but of others. Her sucklings in the rest of Europe eagerly follow her mother call, oblivious of the connotations that will invoke major nation changes, in the displacement of ethnic populations. No right minded leader would entertain such a nightmare being brought to their doorstep, only that they are sucklings, and not true leaders of nations. These sucklings need to be deprogrammed and their eyes opened to the reality of sending the invader packing. Pronto.
jerrys57
10 November 2015, 18:28 GMT
000000
Newsfeed
0
New firstOld first
loader
LIVE
Заголовок открываемого материала
Access to the chat has been blocked for violating the rules . You will be able to participate again through:∞. If you do not agree with the blocking, please use the feedback form
The discussion is closed. You can participate in the discussion within 24 hours after the publication of the article.
To participate in the discussion
log in or register
loader
Chats
Заголовок открываемого материала
Worldwide
InternationalEnglishEnglishMundoEspañolSpanish
Europe
DeutschlandDeutschGermanFranceFrançaisFrenchΕλλάδαΕλληνικάGreekItaliaItalianoItalianČeská republikaČeštinaCzechPolskaPolskiPolishСрбиjаСрпскиSerbianLatvijaLatviešuLatvianLietuvaLietuviųLithuanianMoldovaMoldoveneascăMoldavianБеларусьБеларускiBelarusian
Transcaucasia
ԱրմենիաՀայերենArmenianАҧсныАҧсышәалаAbkhazХуссар ИрыстонИронауОssetianსაქართველოქართულიGeorgianAzərbaycanАzərbaycancaAzerbaijani
Middle East
Sputnik عربيArabicArabicTürkiyeTürkçeTurkishSputnik ایرانPersianPersianSputnik افغانستانDariDari
Central Asia
ҚазақстанҚазақ тіліKazakhКыргызстанКыргызчаKyrgyzOʻzbekistonЎзбекчаUzbekТоҷикистонТоҷикӣTajik
East & Southeast Asia
Việt NamTiếng ViệtVietnamese日本日本語Japanese俄罗斯卫星通讯社中文（简体）Chinese (simplified)俄罗斯卫星通讯社中文（繁体）Chinese (traditional)
South America
BrasilPortuguêsPortuguese
NewsfeedBreaking
19:20 GMTSuicide Pact? Top Labour Remainer Says Party Should Campaign to Rejoin EU
18:58 GMTVideo: Miss France 2019 Confronted by 'Teenage Gang' That Threw Stones at Her in Paris
18:47 GMTFree For All! Enraged Moped Drivers Fight in London Amid Lack of Fuel - Video
18:39 GMTPSG's Kylian Mbappe Caught on Camera 'Lamenting Neymar Would Not Give Him Passes'
18:35 GMTPowerful 5.7-Magnitude Earthquake Hits Philippines' Largest Island Luzon
18:00 GMTInfrastructure Plan: Pelosi Says She 'Never' Brings a Bill to Floor 'That Doesn't Have the Votes'
17:43 GMTUsyk vs. Fury? Gypsy King's Twitter Like Leaves Fans Buzzing About Possible Heavyweight Clash
16:50 GMTLabour Leader Demands Visas For 100K Foreign Lorry Drivers Amid Global Shortage
16:33 GMTLabour Staff Cuts That Prompted Strike Ballot Due to £2m-a-Year Legal Costs
16:23 GMTDHS Chief Reveals Up to 12,000 Haitians Who Crossed Southern Border Were Released Into US
16:21 GMTTurkey Wants US Military to Leave Syria, Iraq After Afghanistan Withdrawal, Erdogan Says
16:06 GMTSPD Leads in German Election Polls With 25.8% as Merkel's Bloc on Track for Worst Result Since 1949
15:59 GMTEx-Nazi Oberlander's Case Sets Precedent for Holding War Criminals to Account in Canada
15:45 GMTFive Palestinians Reported Killed in Israeli Anti-Hamas Operation
15:38 GMTSpain's La Palma Airport Reopens After Brief Pause Over Volcanic Activity
15:37 GMTAustralian Cyclist Recreates Baby From Nirvana's Nevermind Cover Using GPS and City Streets
15:10 GMTSan Marino to Decide Whether to Lift Ban on Abortions
14:52 GMT'Whipping' Story is Attempt to Divert Public Opinion From Biden's Political Failures, Observers Say
14:42 GMTRewards Totalling $30,000 Offered for Info About Gabby Petito's Missing Boyfriend
14:35 GMTTurkish President Reveals Ankara Still Considering Purchase of Second Batch of S-400 Defence System