Montenegrin Legend Crippled by 31 Cops: 'My Soul is Bleeding' 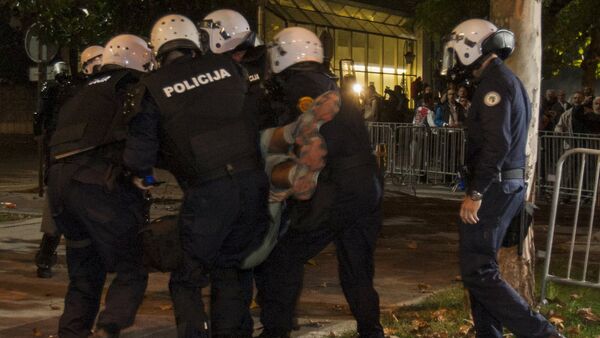 © REUTERS / Stevo Vasiljevic
Subscribe
Can you imagine a national hero violently assaulted by 30 policemen in public after a peaceful anti-government rally in a country which aspires to join the EU and NATO? It's difficult to imagine, but this is exactly what happened in Montenegro.

Vasily Raksha — What happened to renowned Yugoslav two-time champion and the President of Professional Boxing Association of Montenegro, Mijo Martinovic, is beyond comprehension. He is a true legend of Montenegro and a vocal patriot who cherished its independence.

On October 24, the authorities went to the extremes while cracking down on an anti-government rally in Podgorica. Martinovic peacefully participated in the demonstration and later had a supper with his family. Afterwards, he was driving home and was suddenly intercepted by a group of helmeted anti-terrorist forces who dragged him out of the car and ruthlessly beat him with heavy boots and batons for five minutes before the eyes of his shocked family and friends.

Neither the fame he brought to Montenegro nor the age of the 59-year-old man with high blood-pressure and a weak heart, who takes four pills a day, could stop them. Mijo never lost consciousness and felt every kick and every punch.

Then they crashed the car and abandoned the crippled sportsman bleeding on the road.

"They looked like an SS-division of the Third Reich. Thirty one policemen broke my arm, my leg in three places, smashed my head… I lost 700 milliliters of blood. They wanted to leave me to die."

He compared the assault with the notorious Crystal Night – violence against Jews on November 9-10 in Germany and Austria that was carried out by storm detachments with the approval of the authorities.

Doctors operated on him for four hours and fortunately managed to save his leg. Confined to bed, Martinovic said that it was lucky that it was him who bore the brunt of police brutality – the two-meter-tall sportsman managed to survive an attack that would have killed anyone else.

He has a 12-centimeter scar on his head. The policemen beat the athlete to within an inch of his life. 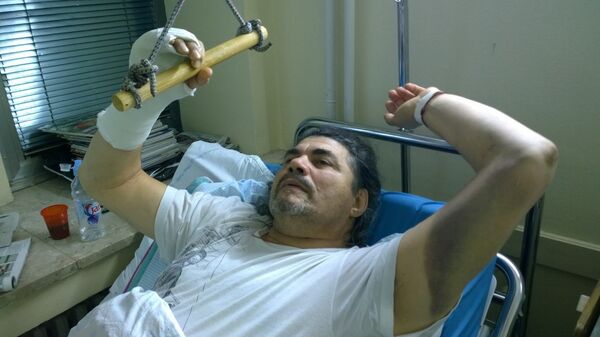 My Soul is Bleeding. They Were Killing My Love for Montenegro in My Heart

But physical torture is not the worst thing he experienced.

"For all my life I have been a patriot and I wanted Montenegro’s independence in the 1990s with my heart and soul. My boxer Dejan Zlaticanin won the world championship and the Montenegrin flag and glory were flying all over the world, and we were training to claim a WBC title. But their batons and boots were killing all my love to my country in my heart. My soul is bleeding."

He lies on the hospital bed with his eyes frequently winking and feverishly studying the ceiling in an attempt to understand what on earth happened and why he "deserved" such a merciless punishment.

"I love freedom and I am a freedom fighter. Freedom is the most sacred gift that a person can get. A free man is the one who cannot become a slave. I never committed the slightest crime, I have always respected the law. Did it happen because I wanted a bit of democratization for my country?"

Was it a tragic coincidence? Did he happen to be in the wrong place in the wrong time and the policemen simply did not recognize whom they were crippling? Mijo disagrees. He is too well-known for 31 officers to assault him mistakenly.

Thousands Take Part in Montenegro Anti-Government, Anti-NATO Rally
The authorities have never apologized to him, whereas state-run media presented a twisted picture with a false accusation from the police that the sportsman allegedly rammed his car into a barricade. But the video from the scene clearly dispels this allegation.

The authorities probably decided to intimidate the population, tired of 25 years of the regime, and chose Mijo as a scapegoat.

On September 27, Montenegrins started a massive demonstration demanding the creation of an interim government and fair elections as well as protesting against corruption and criminality of the leadership.

He gave a deep sigh of pain. The very thought that people with Montenegro flags on their shoulders would nearly murder him – the symbol of the country’s independence – weighs heavy on his heart.

"If they kill me tomorrow, it will be the authorities’ guilt."

He counts on the Montenegrin Prosecutor General and hopes for a fair investigation. But not one of the assailants has yet been held accountable.

The people of Montenegro have never forgotten their hero. They held a demonstration of support and often call and visit Mijo, which endows him with energy and helps to withstand the shock. He promised to carry gratitude to them for his entire life.

Thousands are calling him from Russia, Europe and the United States.

"I know about 15 men unleashing dogs on three or four persons in South Africa, I know about 20 men attacking three-five people in the US during the slave period – but there has not been an example of 31 men beating one. I would hold a sad Guinness Record for that."

Mijo Martinovic said that a country where such a crime is real cannot be European.

"It is close to the Red Khmers and Pol Pot. I had never thought such repressions could happen in my country. They are driving themselves into a corner."

He said that Montenegrins are suffering under the active leadership of self-proclaimed 'tsars.' Mijo cannot understand how such a government can enjoy Western support.

"We have two sorts of people now, and this country with EU aspirations asks: "Are you with us or not?" If I am not with the government, does it make me an enemy of the state?"

He added that the government’s accusations of Russia fanning the protest are just fairy tales and said that such "silly things" as sanctions (Montenegro joined the anti-Russia campaign in May 2014) are not supported by 90 percent of the nation, they are not born by Montenegrins’ will – that’s why people have taken to the streets.

"Russia has helped us for 300 years, it is our brother nation, and it is our mother and defender. It saved our statehood. I will always love it, be it big or small."
At that moment, group of young sportsmen, devoted to their coach, entered the ward to cheer up Mio Martinovic and bring our talk to a close. 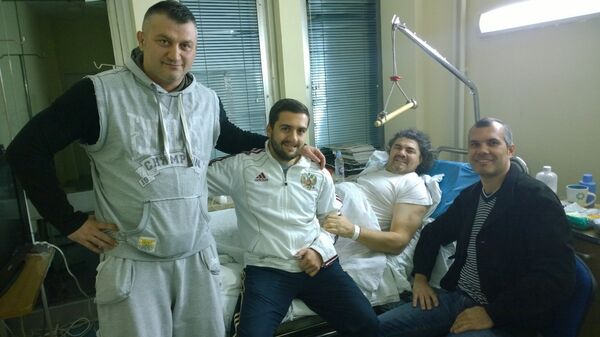