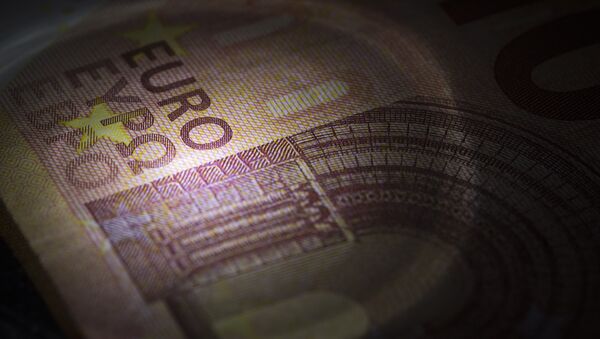 © AFP 2021 / Joel Saget
Subscribe
UK Chancellor George Osborne has warned his German counterpart Wolfgang Schäuble that the European Union is in danger of splitting into two, with those in the Eurozone exerting authority over those countries who are not part of the Eurozone.

The news comes as German Chancellor Angela Merkel admitted there was no longer a "one speed Europe".

Cameron Goes to Iceland, But Draws the Wrong Lessons
Osborne has made it clear he believes there is a genuine possibility that the 19 countries currently in the Eurozone will exert undue influence over those member states — such as the UK, Denmark and Hungary, among others — which are not part of the euro single currency. In outlining his demands for "legal guarantees" as part of renegotiating Britain's membership of the European Union.

He believes that new voting rules introduced as part of the Lisbon Treaty could lead to the Eurozone bloc voting for single market laws that favor the Eurozone nations and penalize non-euro countries. In particular, he does not want Germany to exert undue influence that would enable Frankfurt to usurp London's dominance of the financial sector in Europe.

He was due to tell Schäuble:

"What we seek are principles embedded in EU law and binding on EU institutions that safeguard the operation of the union for all 28 member states. The principles must support the integrity of the European single market."

The new principles "must ensure that as the Eurozone chooses to integrate it does so in a way that does not damage the interests of non-euro members," according to an advance copy of his speech released to the media in London.

In a clear sign of animosity at having been asked to join in the Greek bailout — which the UK vetoed — he was due to say:

"There will be cases where non-euro members want to participate in developments like the banking union. But that participation must be voluntary, and never compulsory. We must never let taxpayers in countries that are not in the euro bear the cost for supporting countries in the Eurozone.‎"

Osborne #Eureform deal: You get a EZ that works better, we get a guarantee that costs not imposed on us. "A deal that is written into law."

"In the UK, where this is widely interpreted as a commitment to ever closer political integration, that concept is now supported by a tiny proportion of voters," Osborne said.

"I believe it is this that is the cause of some of the strains between Britain and our European partners. Ever closer union is not right for us any longer."

Osborne received support from German Chancellor Angela Merkel, who — speaking in Berlin ahead of Osborne — said:

"I agree that Britain should stay in the European Union, but of course the decision is not up to us, it will be up to the British. Where there are justified concerns – whether competitiveness or a better functioning of the EU – British concerns are our concerns."

Admitting Osborne's belief that Europe would be split, she added:

"The Europe of today is no longer a one-speed Europe."

Dr Ulrich Hoppe is Director General of the German-British Chamber of Industry & Commerce told the BBC Monday: "I think Germany has a huge interest in Britain staying within the European Union and I think the concerns the British side have are well-understood in Germany and I think there is some flexibility.

"The German side is willing to help and convince other Europeans to go a long way to meet [Osborne's] demands. Although Osborne has not so-far revealed his wish list of demands — believing a poker player never gives away his hand — Hoppe believes his visit to the German finance minister may start the ball rolling on specific negotiations."

"The British Government was forced [at the European leaders' summit in October] to come up with a clearer plan of what they want to renegotiate, and I think George Osborne's attempt to talk to the German finance minister [will mean] they can find out what kind of 'wiggle-room' there is and then they can formulate their demands so that most of them can be met," Hoppe said.