Forbes Fiddles With the Figures on Russians' Support for Syrian Campaign 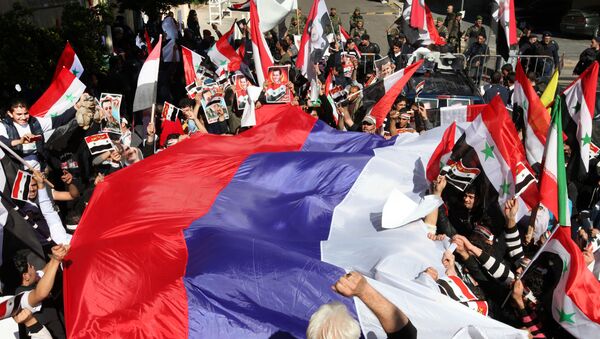 © AP Photo / Bilal Hussein
Subscribe
In an apparent attempt to muddy the waters on Russian public opinion, Forbes published an article suggesting that less than half of all Russians support the military intervention in Syria. However, the polling figures cited by the publication actually find that nearly three-quarters of Russians actually support the campaign.

More Dollars Than Sense: US Hands Weapons to Favored Fighters in Syria
On Thursday, Forbes contributor Paul Gregory published a piece with the catchy headline: "Putin's Syria Narrative Must Win Russian Public Opinion – But It'll Be a Hard Sell." In it, Gregory suggests that if President Putin wants to maintain his high levels of support among the Russian people, he will have to "sell" his Syrian narrative, which he "understands…will not be easy."

Gregory cited polling by the Levada Center, an independent sociological research institution which surveyed Russians from October 2-5, at the onset of the Russian air campaign in Syria. Gregory 'found' that "whereas some 46% express support for sending Russian troops, 33% are against and 20% have not made up their minds," vaguely adding, without clarifying any figures, that "respondents favor bombing ISIS, whether by Russian or French planes."

This led the analyst to put a question mark over "whether Putin will be able to convince the Russian people to bear the burden of yet another foreign adventure. His propaganda succeeded for Ukraine, but is less likely to work in faraway Syria."

Leaving aside questions about what proof he actually has to offer about Russia's "foreign adventure" in Ukraine, the more important point here is Gregory's 'interpretation' of the Levada survey on Syria.

Russian Airstrikes in Syria Payment For Mistakes of Others - Lawmaker
Gregory appears to have selectively used only Levada's figures from the second question, which asked whether Russians "support the Federation Council's decision to allow the use of Russian troops abroad." The wording of the question, and particularly the word 'troops', helps explain respondents' hesitation in supporting intervention. It also helps explain fears about involvement turning "into a 'new' Afghanistan situation for Russia," (with 45% suggesting it is a 'possibility or a 'certainty', and 38% that it is 'unlikely' or 'impossible'), again, presumably only if Russian ground troops were introduced.

With the Russian air campaign now entering its second month, and Russian ground troops nowhere in sight, Levada found, in polling conducted last week, that the numbers of Russians who believe the Syrian campaign could turn into 'a new Afghanistan' is steadily dropping, with only 35% now believing that it is possible or likely, and a full 50% confident that it will not happen.

Putin, by Gregory's own admission, has repeatedly said that Russia will not introduce ground troops, with analysts suggesting that the Russian leader remembers the bloody lessons from the 80s war in Afghanistan, as well as Washington's more recent adventures in Afghanistan and Iraq.

Russian Strikes Destroy 1,600 Terrorist Targets in Syria Since Sept. 30
Russia's leaders and geopolitical analysts have emphasized again and again that Moscow's aims are limited to an air campaign which, if successfully coordinated with the Syrian Army fighting the jihadis, will make the introduction of ground troops a moot point.

As Russian geopolitical analyst Gevorg Mirzayan explained a few days after the start of the air campaign, Russia's military intervention in Syria is about "destroying its future enemies, with the help of Syrian, Iraqi and Iranian hands, nations for whom the problems which could face Russia tomorrow are already being faced today. They are the ones who bear the main financial and human losses of this war, their soldiers are the ones fighting on the ground and conducting real offensive operations. All they need now from Russia is technical assistance, intelligence and airstrikes. And all this Moscow has provided."

With these facts in mind, perhaps next time the Russia-watchers over at Forbes should be more careful before putting words in Russians' mouths.