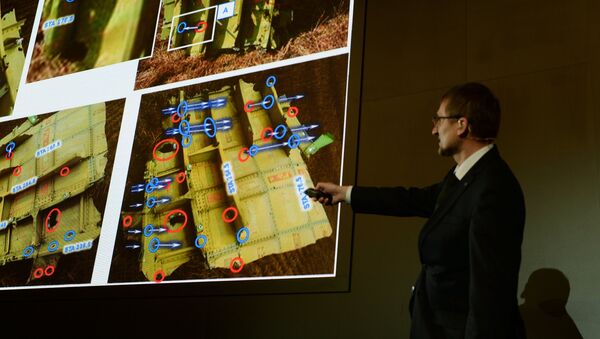 A Dutch Safety Board (DSB) public hearing into the flight MH17 crash will amend the lack of a press conference at the presentation of its final report earlier this month, a Dutch lawmaker told Sputnik on Saturday.

MOSCOW (Sputnik), Daria Chernyshova – On October 13, the DSB did not open the floor to the media during the unveiling of its findings into the downing of Malaysia Airlines plane over the eastern Ukrainian countryside in July 2014. The lower house of Dutch Parliament is scheduled to hold a public hearing on November 3, in which three DSB board members will be available to answer questions from the press.

"During the press conference of the presentation of the report, nobody was allowed to ask questions. That is one of the reasons the parliamentarians insisted on a public hearing of the Safety Board," Pieter Omtzigt said.

The Christian Democratic lawmaker provided a number of questions he planned to pose to the investigators, including why Ukraine’s both military and civilian radars were switched off at the time of the incident.

He also said he wants clarification why Russia never provided their raw primary radar data to the investigators, even though Moscow publicly presented them on July 21, 2014. Meanwhile, the DSB says that Russia was required to supply the data under the ICAO treaty, and thus violated the treaty.

Further, Omtzigt said the DSB investigative team allowed the North Atlantic Treaty Organization (NATO) to check its own radar and "report that it had nothing of interest," while the United States was not asked to provide radar data altogether.

"That is weird, as [US State Secretary John] Kerry has publicly stated that the US saw the attack live and saw the plane disappear from the radar screen," Omtzigt stressed, adding that Washington "must have data" relevant to the probe.

After the publication of DSB report into the incident, which killed 298 people on board the Boeing 777 aircraft, the deputy chief of Russia’s Federal Air Transport Agency said Ukraine provided only secondary data to the investigation.

DSB concluded that a surface-to-air missile exploded near the airliner’s left side, but said further investigation is needed to determine the party that fired the missile.