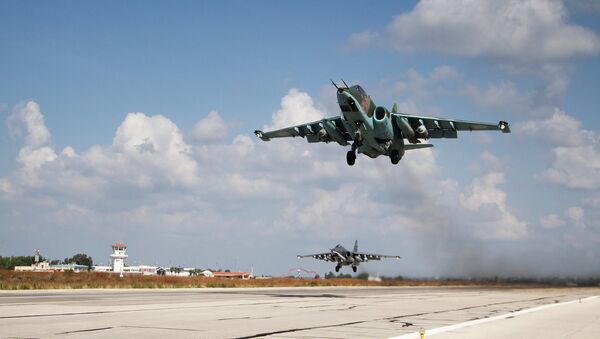 Former French Prime Minister Francois Fillon writes that France must join the efforts of Russia and Iran to defeat the Islamic State and protect French interests in the Middle East.

Russia ‘Has Every Right to Intervene in Syria' - French Politician
France's authority in the Middle East has been damaged by posturing in the West, and in order to defeat the Islamic State and restore its position in the region, its diplomats must engage with Moscow and Tehran, wrote former French Prime Minister Francois Fillon in a blog post on Wednesday.

Fillon described the interventions of Russia and Iran to defeat the Islamic State in Syria as a direct consequence of foreign policy mistakes by European and US leaders, arising from misrepresentation of the reality of the terrorist threat.

"The Russian intervention is the result of western irresolution, unable to choose a clear strategy against Daesh, because they are mired in their ineffective and counter-productive moral stances."

"The result is spectacular: Iraq, liberated by the United States applauds and calls Putin to intensify the military effort. Turkey does not know which way to turn, and is now outlining the option of a political transition that in the short term does not exclude Bashar Al-Assad, which was unthinkable a few months ago."

"Militarily, Russian strikes are aimed primarily at regaining Syria and target many Islamist groups funded by the Gulf countries, such as the Islamic State in Iraq and the Levant," Fillon described the approach of the Russians and Iranians to fighting the Islamic State, which is forcing other players such as Turkey and the US to reconsider their priorities.

"They appear increasingly coordinated with the Iranians on a clear division: the skies to the Russians and the earth to the Iranians."

"The military strategy is aimed at preventing the collapse of the Syrian regime, which would open wide the doors of Damascus and the Mediterranean coast to Daesh, and cause the dangerous escalation of arms deliveries to rebel groups by the Saudis and Americans," writes Fillon.

Fillon attributes the "humiliation" of France's lack of input in the process to Francois Hollande's "mindless intransigence" on the Syrian issue.

"The downgrading of France in the Middle East continues. Our diplomacy has learned from the press about the meeting in Vienna between the Americans, the Russians, the Turks and the Saudis."

On Thursday the foreign ministers of the US, Russia, Turkey and Saudi Arabia held talks ahead of main discussions held in Vienna on Friday, which aim to diplomatically bring a political resolution to the Syrian conflict.

Heads of Foreign Ministries Begin Syrian Talks in Vienna
The talks on Friday will be attended by the foreign policy chiefs of Iran, the European Union, and other powers in the Middle East and Europe, such as the UK, France, Egypt and Lebanon. The Vienna discussions are the first time all foreign powers with an interest in Syria have come together to resolve the conflict.

"Russians and Iranians are now playing the leading roles in a conflict that concerns us directly," wrote Fillon, citing the influx of refugees into Europe from the Middle East, historic responsibilities towards Christians in the Middle East, the high threat of terrorism, and France's historic ties to Lebanon as reasons for France to play a more active role in resolving the Syrian crisis.