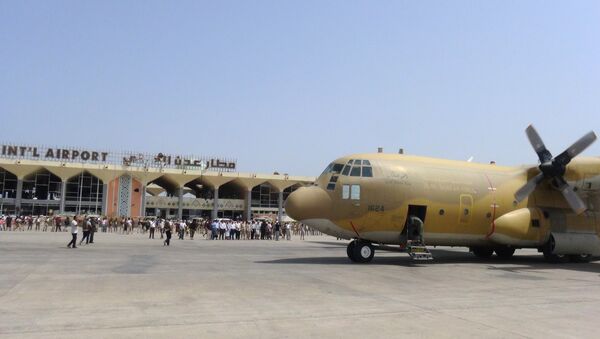 © AFP 2021 / STR
Subscribe
Over 500 ISIL militants have been transported from Syria to Yemen aboard planes arriving from Turkey to fight against Houthi rebels, a Syrian general said Tuesday.

Syrian Armed Forces spokesman Brig. Gen. Ali Maihub claimed that more than 500 ISIL militants had been transported from Syria to Yemen aboard 4 planes that had arrived from Turkey on October 26.

According to him, two of the planes belong to Turkish airlines, one is a Qatari aircraft and one is a UEA plane.

"According to the intelligence data, 4 planes arrived from Turkey at the airport of Aden [in Yemen] on October 26. Two of them [planes] belonged to Turkish airlines, one — to Qatar airlines and another aircraft was owned by an UAE airline. More than 500 militants of ISIL terrorist group were on board, they were transported from Syria to save them from Russian airstrikes," Maihub said, according to RIA Novosti.

Yemeni Houthis Claim Saudi Apache Helicopter Downed
He further claimed Saudi-led coalition officers met ISIL militants at the airport in Yemen. The Syrian general said that the jihadists were supposed to take part in a ground operation against Houthi rebels.

"[ISIL] militants were met by officers from the Saudi-led coalition, who took them out of the [Yemeni] airport in three groups. The first group was taken to the town of al-Bab in the Mandeb province, the second — to Maariv, the third — to Saudi provinces Jazan and Asir," he said.

"The militants are expected to take part in the ongoing ground operation where ground coalition forces have recently suffered serious losses in clashes with Houthi fighters," the general said, adding that, based on intelligence data, similar transfers of ISIL militants from Syria would continue.

"According to available information, operations aimed to transport ISIL terrorists from Syria will continue in a short time," he added.

000000
Popular comments
Now who can trust erdogan....this guy is finished!

27 October 2015, 20:01 GMT4
000000
Article begs several questions: From where in Syria did the planes take off from; if they did fly from Syria, why weren't they intercepted? The Saudis are short on troops; they had to hire 800 Colombian mercenaries and now this Daesh group. If true, this is the first overt interaction between Saudi and Daesh I know of and ought to be enough grounds for UNSC sanctions--at least a vote so the UK and its Outlaw Empire Master will need to veto to protect their ally.
karlof1
27 October 2015, 21:27 GMT2
000000
Newsfeed
0
New firstOld first
loader
LIVE
Заголовок открываемого материала
Access to the chat has been blocked for violating the rules . You will be able to participate again through:∞. If you do not agree with the blocking, please use the feedback form
The discussion is closed. You can participate in the discussion within 24 hours after the publication of the article.
To participate in the discussion
log in or register
loader
Chats
Заголовок открываемого материала
Worldwide
InternationalEnglishEnglishMundoEspañolSpanish
Europe
DeutschlandDeutschGermanFranceFrançaisFrenchΕλλάδαΕλληνικάGreekItaliaItalianoItalianČeská republikaČeštinaCzechPolskaPolskiPolishСрбиjаСрпскиSerbianLatvijaLatviešuLatvianLietuvaLietuviųLithuanianMoldovaMoldoveneascăMoldavianБеларусьБеларускiBelarusian
Transcaucasia
ԱրմենիաՀայերենArmenianАҧсныАҧсышәалаAbkhazХуссар ИрыстонИронауОssetianსაქართველოქართულიGeorgianAzərbaycanАzərbaycancaAzerbaijani
Middle East
Sputnik عربيArabicArabicTürkiyeTürkçeTurkishSputnik ایرانPersianPersianSputnik افغانستانDariDari
Central Asia
ҚазақстанҚазақ тіліKazakhКыргызстанКыргызчаKyrgyzOʻzbekistonЎзбекчаUzbekТоҷикистонТоҷикӣTajik
East & Southeast Asia
Việt NamTiếng ViệtVietnamese日本日本語Japanese俄罗斯卫星通讯社中文（简体）Chinese (simplified)俄罗斯卫星通讯社中文（繁体）Chinese (traditional)
South America
BrasilPortuguêsPortuguese
NewsfeedBreaking
14:15 GMTRonaldo Will Cause as Many Problems as He Solves for Solskjaer, Ex-Liverpool Player Carragher Says
14:03 GMTXi Urges SCO to 'Resist' External Meddling After US, Australia Vow to Bolster Ties With Taiwan
14:02 GMTUN Security Council Holds Meeting on Afghanistan
13:39 GMTHitting US Debt Ceiling Could Trigger Recession, White House Says
13:32 GMTUnited Airlines Briefly Grounded Flights in US, Canada Due to Computer Issues, FAA Says
13:29 GMTDutch Acting Defense Minister Resigns Over Kabul Evacuations Chaos, Reports Suggest
13:27 GMTFrance Says It Cannot Trust Australia in Trade Talks After Canberra Ditched Joint Sub Deal
13:20 GMTPiers Morgan Says His New Job Will Be 'Stuff of Nightmares' for Meghan Markle
13:18 GMTIndonesia Wary of Australia's Plans to Acquire Nuclear Submarines
13:14 GMTUS Slaps New Hezbollah-Related Sanctions on Several Individuals
12:57 GMTPakistan Will Get ‘Badly Burnt’ If It Courts the Taliban Beyond a Point, Warns Author
12:51 GMTUS General Mark Milley Reportedly Downplayed George Floyd Protests' Severity in Talks With Trump
12:51 GMTIs Narendra Modi Emerging as the Most Sports Loving Indian Prime Minister?
12:28 GMTFAA Bans Drone Flights Over Texas Bridge After Thousands of Haitians Filmed Flocking to Area
12:27 GMT'Show Got It Wrong': Priyanka Chopra Apologises After Taking Flak Over 'The Activist' Format
12:05 GMTNicki Minaj Tweet That COVID-19 Vaccines Cause Impotence Sparks Protest Outside CDC HQs - Video
12:01 GMTPelosi Asked After Capitol Riot If WH Staff Did Anything But 'Kiss' Trump's 'Fat Butt', Book Claims
11:48 GMTArmenian Police to Block Streets Near Central Square Due to Planned Rallies
11:32 GMTUK Military 'Actively Recruiting' New Spies for Deployment in Asian Region Amid AUKUS-Caused Waves
11:14 GMTPunjabi Activists Clash With Police in Delhi During Anti-Farm Law Protests - Video