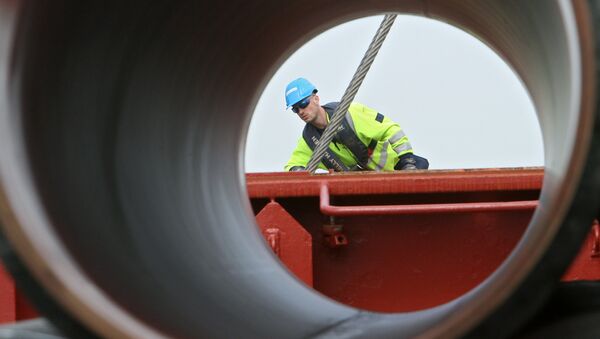 Eurogas President Gertjan Lankhors said that the European Commission should welcome the Russian Turkish Stream project as long as it meets EU regulations.

"If it [Turkish Stream] brings gas into Europe, you have to look at whether the partners in that project comply to European regulations, and if that is the case, then be happy with that project as well," Lankhorst said on Friday.

The 63 billion cubic meter gas pipeline is scheduled to run through the Black Sea to the Turkish-Greek border. Turkish Stream replaced the South Stream project, which was cancelled by Russia in 2014, after a number of EU member states announced they withdrew support for the pipeline.

Agreement for Turkish Stream Pipeline Still in Place - Lavrov
Lankhorst said that he supports both the Turkish Stream and Nord Stream, both pipelines from Russia, as well as any projects that enhance Europe’s energy supplies.

"I think, if there are private parties that want to invest in an extra pipeline that could bring [what] Russia has to Europe, that is a good initiative and we should be happy with it," Lankhorst noted.

He further added that Russia’s willingness to continue to invest in Europe, despite the failed South Stream project, shows "there is trust in the future of the European gas market."

EU member state Greece has expressed its commitment to cooperate with Russia on Turkish Stream, which would bring needed revenue to the heavily indebted country.

Construction on Turkish Stream was scheduled to begin in June, but was postponed pending a formal agreement. According the Russian Energy Ministry, Russia and Turkey are expected to sign the pipeline agreement no earlier than December 2015.

Eurogas is an association representing the European gas wholesale, retail and distribution sectors. It is comprised of 44 companies and associations from 24 countries, according to the Eurogas’ website.