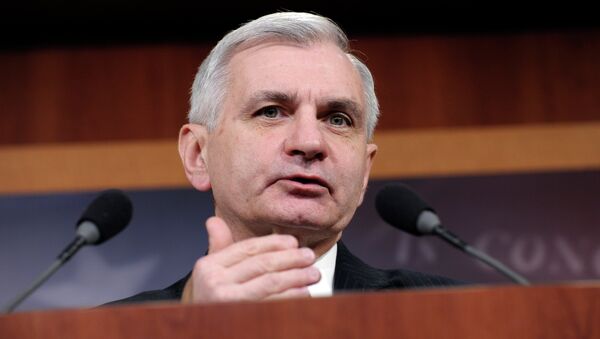 © AP Photo / Susan Walsh
Subscribe
International
India
Africa
US Senator Jack Reed said that the death of US servicman during a hostage rescue operation in the Iraqi Kurdistan does not raise new questions about US troop presence in the Middle East.

US Defense Secretary Approved Rescue Mission in Iraq Due to Imminent Threat
WASHINGTON (Sputnik), Leandra Bernstein — The death of a US commando during a hostage rescue operation in Iraq does not raise new questions about US troop presence in the region, Senator Jack Reed told Sputnik on Thursday.

"This Special Operations presence has been there [in Iraq], and I think when they have the actionable intelligence… then they can operate and they will," Reed told Sputnik in response to a question whether the hostage rescue operation would impact ongoing debate about redeploying more US troops to Iraq.

On Thursday, the Pentagon confirmed the death of one US serviceman during a hostage rescue operation in the Iraqi Kurdistan. The operation was carried out by US Special Operations forces, alongside Iraqi and Kurdish Peshmerga soldiers.

Twenty ISIL Terrorists Killed in US-Iraqi Mission to Free Hostages
The death of the service member was the first US casualty in the war against the Islamic State terrorist group.

Reed, the ranking member on the US Senate Armed Services Committee, has previously argued against members of his own committee who have called for an increased US troop presence on the ground in Iraq to combat the Islamic State.

According to reports, 70 hostages were freed in the rescue operation and 20 Islamic State combatants were killed.