US to Lose International Trust Because of 'Games' With ISIL – Lawmaker 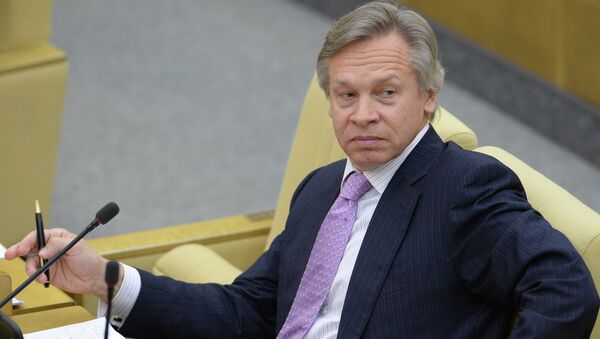 © Sputnik / Vladimir Fedorenko
/
Go to the photo bank
Subscribe
Head of the Foreign Affairs Committee of the lower house of Russia's parliament said that United States may lose the world’s trust because of its policy toward the Islamic State jihadist militant group.

US Started Hitting ISIL Targets ‘After Russian Airstrikes’
MOSCOW (Sputnik) – The United States may lose the world’s trust because of its policy toward the Islamic State (ISIL) jihadist militant group, the head of the Foreign Affairs Committee of the lower house of Russia's parliament said on Thursday.

"The United States is experiencing a crisis of trust. After the incident with the test tube, half of the world stopped believing them. And after the games with ISIL, the second half will stop believing as well," Alexei Pushkov said on Twitter.

In 2003, then US Secretary of State, Colin Powell, displayed before the UN Security Council a test tube alleged to contain Iraqi chemical weapon samples. Powell claimed the contents of the test tube were evidence proving the necessity of a military operation against Iraq. No chemical weapons were found at any time during or after the US invasion of Iraq.

The United States and its allies have been conducting airstrikes on ISIL positions in Iraq and Syria since 2014. The coalition gained the support of Iraqi authorities, but airstrikes in Syria have been carried out without coordination with Damascus or UN Security Council approval.

000000
Popular comments
This is an excellent point. I am amazed at what even the bloggers don't write about as much. The US is burning the candle at both ends. I often think US policy is about destroying the US as much as anyone else. The trust issue is important and losing moral authority to govern will have consequences internationally and also domestically.
jas
22 October 2015, 12:25 GMT
000000
Unlike in Russia, where the word's Putin and Russia are interchangeable, we should be clear that George W. Bush only represents his own narrow interests, and not necessarily the interests of the entire American People or Government. Yes, George Bush and his cronies lied, but they also stole the election with fraud in Florida, where Jeb was governor. This is a good reason NEVER to elect the fraudster Jeb Bush for President, as we will probably have 9/11 number 2 on steroids, if those guys ever take over again.