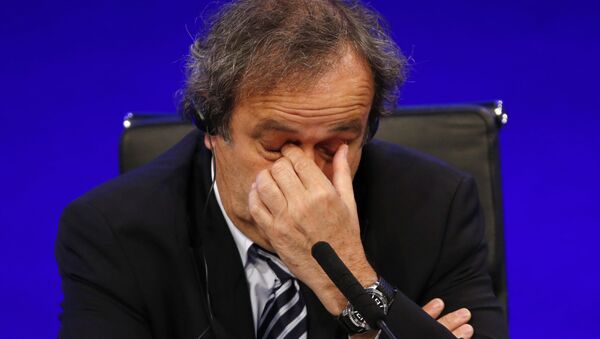 UEFA President Michel Platini confirmed Monday he received over $2 million in 2011 from FIFA without a written contract.

UEFA Calls On FIFA to Decide on Platini Fate by Mid-November
MOSCOW (Sputnik) — In late September, the Swiss Office of the Attorney General launched a probe into corruption claims against FIFA President Joseph Blatter over making a "disloyal payment" of $2.05 million to Platini in 2011 at the expense of FIFA, for work allegedly performed in 1999-2002. Blatter and Platini told investigators the payment was legal and was compensation for Platini’s work as the FIFA president’s adviser for four years.

"It was a man-to-man agreement. … In any case, I have learned that according to the Swiss law, an oral contract is treated as a written contract," Platini said as quoted by Le Monde.

Adidas Denies Reports of Bribing FIFA to Grant Germany 2006 World Cup
Platini added that the money paid for his work on the global competition calendar, a FIFA Goal program supporting global football federation and for accompanying Blatter in his travels.

"In short, I really worked and many people can testify," Platini claimed.

Sixty-year-old Platini, a potential candidate for FIFA president, was suspended for 90 days by FIFA's Ethics Committee on October 8 as part of the ongoing FIFA investigation into fraud and corruption among its leaders.