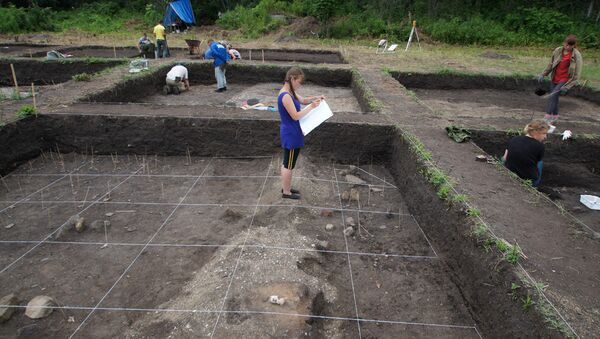 © Photo : dvfu.ru
Subscribe
It looks like Denmark was really 'into metal' long before their Viking raids terrorized Europe, as an Iron Age sacrificial site discovered by archaeologist in the country reveals.

"At Skodstrup, we have the whole spectrum of an Iron Age community: A well-structured village with an associated burial ground and sacrificial bogs. It gives us a unique insight into the life of Iron Age people in war and in peace, and not least a glimpse into their religious universe," excavation director Per Mandrup said.

To Valhalla! Norwegian High School Brings Back the Viking Age
Most of the skull in the human sacrifice skeleton was separated from the rest of the body, with only the jaw remaining intact.

"We expected great things from the excavations because a settlement, a burial ground as well as extensive offerings and sacrifices in the bogs around Skodstrup have previously been found. However, these new discoveries more than live up to our expectations and the finding of a human skeleton is the crowning touch," Mandrup added.

Previous discoveries in a nearby swamp included a human sacrifice, weapons, burnt human bones and a wooden phallus.