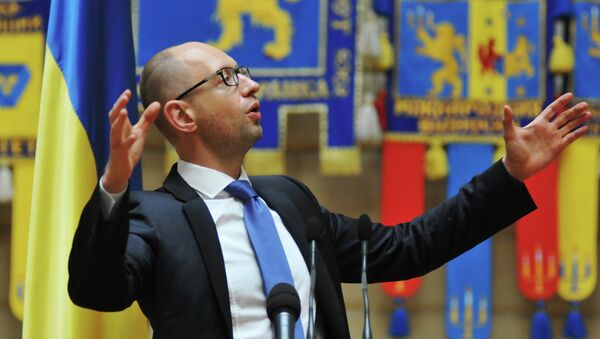 © RIA Novosti . Aleksandr Maksimenko
/
Go to the photo bank
Subscribe
Prime Minister Arseniy Yatsenyuk warned Thursday that Ukraine would take Russia to court if Moscow did not agree to Kiev's debt restructuring terms. He also said that Kiev would demand "over a trillion dollars" from Russia for the loss of Crimea and Donbass. The PM's press service soon clarified that he meant a trillion hryvnia ($46 billion US).

Speaking before Ukraine's parliament on Thursday, Yatsenyuk suggested that Russia should accept Kiev's conditions on the restructuring of its $3 billion sovereign debt, warning that if Russia does not accept conditions proposed by Kiev, it won't pay anything and will take Russia to court.

"The question of the debt amounting to $3 billion, which Russia must restructure and partially write off, has not been resolved. [By] October 29, we propose that Russia decide for themselves: do they want to accept the conditions that we proposed to all other creditors, or do they believe that they are unique? If they believe that they are unique, we are ready for a legal case with Russia," Yatsenyuk warned.

Noting that Ukraine is prepared for a "legal war" with Russia, the prime minister then went on to suggest that "we will demand from Russia more than one trillion dollars over Crimea and Donbass. We are ready to launch a lawsuit on this matter."

Commenting on Yatsenyuk's statements, Kremlin press spokesman Dmitri Peskov voiced his surprise over the $1 trillion figure. "Crimea is Russian territory. Donbass is Ukrainian territory. Where did the figure of $1 trillion come from? It's not clear," he noted.

The Ukrainian cabinet's press service has since clarified that the PM meant to say "one trillion hryvnia," not dollars. A trillion hryvnia is equivalent to about $46 billion US.

"Meanwhile, in Ukraine's cabinet of ministers."

Peskov added that the case has absolutely no merit, and that Moscow's position on Ukraine's debt repayment has not changed: Kiev must repay its debts in full, and in a timely manner.

Last week, Finance Minister Anton Siluanov noted that Russia and Ukraine could not come to an agreement on the restructuring of Ukraine's $3 billion sovereign debt, noting that Russia would demand the full repayment of Ukraine's Eurobonds by December.

Ukrainian Finance Minister: $40 Bln in Assistance Not Enough
In response, Ukrainian Finance Minister Natalie Jaresko noted that she hoped that the IMF would continue to support Kiev with financial loans in the event of non-repayment, despite the organization's rules that it will not assist countries which have not paid off their debt to sovereign creditors.

Three quarters of Ukraine's creditors had earlier agreed to write off $3 billion from Ukraine's $70.5 billion debt, and to restructure another $8.5 billion.

000000
Popular comments
What is Pm Yatsenyuk talking about?? The loss of Donbass? It is still very much a part of Ukraine. The real problem is Kiev not willing to make any compromise.