German Protesters Call For TTIP Deal to Be Scrapped 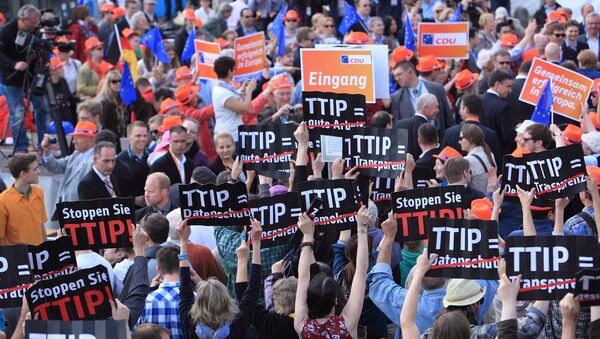 © Flickr / campact
Subscribe
Fabio De Masi, Member of the European Parliament from German Die Linke party, said that protests against TTIP show that the people do not want democracy undermined by special rights for companies to sue states via investor-state dispute settlement and hinder progressive legislation via regulatory cooperation.

TTIP - Part of Grand US Plan to Isolate Russia From Europe
MOSCOW (Sputnik), Yulia Shamporova — Implementation of the Trans-Atlantic Trade and Investment Partnership (TTIP) trade deal must be stopped, in light of large protests against it and similar pacts, Fabio De Masi, Member of the European Parliament from German Die Linke party told Sputnik on Thursday.

The TTIP agreement seeks to deregulate trade between the United States and Europe and create the world's largest trade zone, encompassing over 60 percent of global production. Several other similar deals, such as the Comprehensive Economic and Trade Agreement (CETA) between Europe and Canada and the Trade in Services Agreement (TiSA), which brings together 24 parties, are also being negotiated.

"Those free trade agreements must finally now be stopped. A quarter million demonstrating in Berlin against them –very impressive! That shows — together with more than 3,2 million signatures in the EU against TTIP, CETA and TISA – that the population of Europe does not want these free trade deal," De Masi added, referring to the Sunday’s protest against the deals in Berlin, which brought together some 150,000-250,000, according to various estimates.

Over 3.25 million people have so far signed a petition against the highly controversial TTIP and CETA deals.

ISDS protocols allow investors to dispute the laws of sovereign governments if corporations suspect their profits may be negatively affected. In July, EU Trade Commissioner Cecilia Malmstrom said that the original system of investor-state dispute settlement cannot be continued within the TTIP deal. She urged negotiators to hear the EU parliament’s call for a new system of open trials.

De Masi added that those who are against the deals understand that the pacts will lower standards for consumer and environmental protection.

TTIP has stirred condemnation around the world, with opponents observing it has been negotiated in secret and what text has been leaked details the undermining of environmental, health, safety and labor standards. Proponents claim the deregulation treaties will spur the economic growth of large companies.