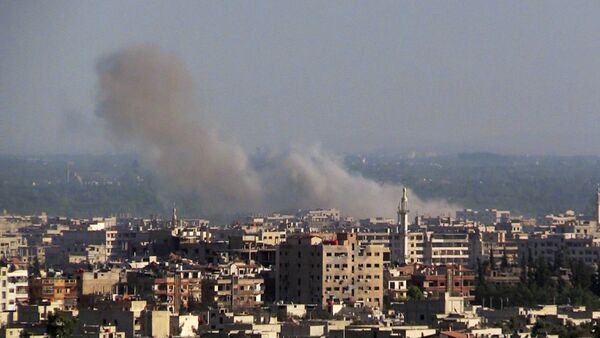 © Sputnik / Michael Alaeddin
/
Go to the photo bank
Subscribe
Two shells hit the Russian embassy area in Syria's capital Damascus Tuesday as scores of pro-government supporters gathered outside the compound to thank Moscow for its intervention in Syria.

According to a RIA Novosti correspondent on the scene, the diplomatic mission staff are all safe.

An eye-witness at the scene told the news agency that several shells hit close to the site of a peace rally in support of Russia’s air campaign in Syria.

"The rounds struck the location where a peace demonstration was underway in support of Russian action in Syria. One shell landed outside a sports club in al-Barada, the other in the al-Adawi [districts]. Several people were injured. The site of the blasts has been cordoned off," the witness said.

Earlier on Tuesday, several mortars were fired at the Russian Embassy, two of them striking the building. According to an embassy employee, no one inside the building was injured.

“In regard to the shelling of our embassy in Damascus, this has been confirmed by our ambassador. Two shells struck the embassy compound…This is obviously a terrorist attack directed to most likely frighten the backers of the fight against terror and not allow them to win in the fight against extremism,” Russian Foreign Minister Sergei Lavrov said during a press conference in Moscow.

He added that Moscow would cooperate with Damascus authorities to find those responsible for the attack on the Russian Embassy in Syria.

000000
Popular comments
Thank God no one was killed. The U.S., providing weaponry to murderers in Syria, is liable for all their war crimes.