I'm a Refugee, Get Me Out of Here! Iraqis Queuing Up to Flee Finland 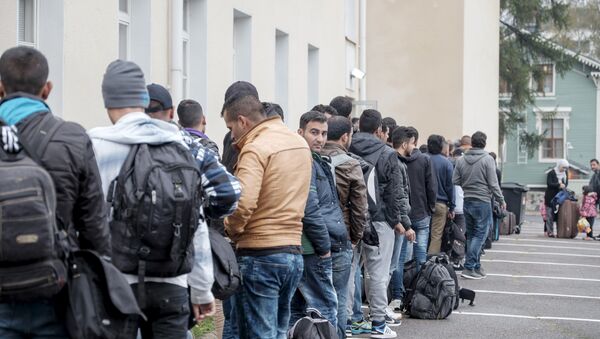 © REUTERS / Panu Pohjola/Lehtikuva
Subscribe
Finnish press report that Iraqi refugees are queuing for passports at the Iraqi embassy, in a bid to leave the country.

Finnish Customs Seizes Hundreds of Fake Refugee Passports
Iraqi refugees in Finland are queuing outside the Iraqi Embassy in Helsinki to get new passports so they can leave the country, Helsingin Sanomat reported on Wednesday.

Many of the refugees lack the necessary documents, having left them in the hands of human traffickers.

According to Helsingin Sanomat, their reasons for leaving were often related to family problems, or the health of a family member; however, the most common complaint was that they were disappointed with the local conditions. Many Iraqis were disappointed to return to their reception centers empty-handed, after finding out that the embassy has run out of passports.

"My dad supports my family in Iraq," said one refugee, Ahmed, who had arrived in Finland a month previously.

"Now he is in poor health, and I have to return to help my family."

Ahmed explained that he was disappointed with the conditions he lived in in Finland.

"I was placed in a psychiatric hospital, in poor condition. There were a lot of us living in the same room, many began to show symptoms of poor health, then we were eventually transferred and the room was closed."

Finland Threatens to Tighten Asylum Rules for Iraqis and Somalis
The newspaper reported that many refugees, including Ahmed, had spent the night sleeping rough after leaving asylum reception centers such as those in Oulu and Kangasala to reach Helsinki, where they were surprised to find that they were not entitled to stay in the city's reception centers.

Mogdad Hassan, a refugee from Basra, told the newspaper that he was in possession of a passport, but that he did not have the money to return home; he was hoping for financial support to return from the authorities.

"I came to Finland via Sweden. I thought that I could get a job here, bring my family after me and we could live here like the Finns," he said.

000000
Popular comments
cast235, what?is it our wars or nato wars?nato members should take responsability.we will for cis region,even if u r guilty here too