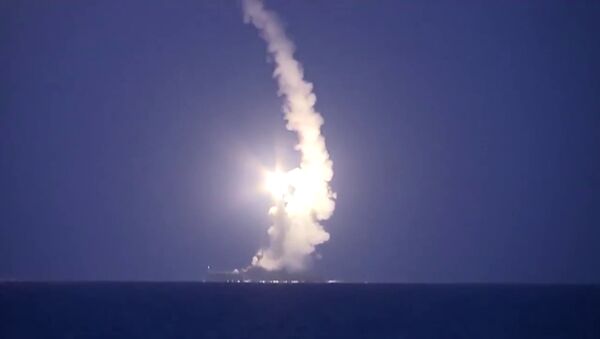 Iranian defense ministry believes reports on "fallen Russian cruise missiles" are part of the intensified western propaganda war, according to a source.

Tehran has denied US reports that four of Russia's cruise missiles targeting ISIL actually fell to the ground in Iran, with the country's defense ministry calling the accusations "psychological war."

Russia's Defense Ministry also refutes US media reports of an alleged incident involving cruise missiles which were fired at ISIL positions in Syria on October 7, stating that all missiles hit their designated targets.

"No matter how unpleasant and unexpected for our colleagues in the Pentagon and Langley was yesterday's high-precision strike on Islamic State infrastructure in Syria, the fact remains that all missiles launched from our ships have found their targets," ministry's spokesman Maj. Gen. Igor Konashenkov said.

On Thursday, CNN reported that four of the 26 missiles fired from Russian warships in the Caspian Sea went off target and crashed in Iran. That report was based on anonymous Pentagon sources, who despite claiming to have evidence of the targeting malfunction, could not identify where, precisely, the missiles landed.

"In contrast to CNN we do not talk with reference to anonymous sources," Konashenkov said. "We show the launch of our rockets and the targets they struck."

Indeed, the Russian Defense Ministry has posted a number of videos to prove the accuracy of its targeting systems.