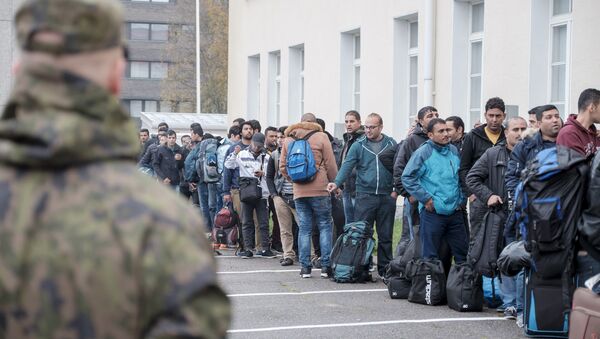 © REUTERS / Panu Pohjola/Lehtikuva
Subscribe
International
India
Africa
The vast majority of refugees arriving in Finland are in fact male adults and not women or children, according to the country’s Ministry of the Interior.

Danish Parties Agree to Tighten Immigration Rules Amid Refugee Crisis
The head of Finland's Immigration Services asylum unit, Esko Repo, and communications chief Hanna Kautto told the Finnish news outlet Yle that out of the 19,632 refugees that have arrived in Finland this year, over 15 thousand are adult males. The number of female migrants totals 2,816 and there are also about 2,000 children travelling with adults as well as roughly one thousand unaccompanied minors.

Furthermore, only 409 of the refugees came from Syria, with the majority of the migrants – nearly 14 thousand people – arriving from Iraq.

According to the ministry's estimates, the total number of refugees expected to arrive in the country this year alone totals 50,000 people.

Germany Under 'Extreme Burden', Expecting 1.5 Million Refugees in 2015
The officials also said that there are currently about 80 reception centers and emergency shelters operating in the country and that it costs about 40 euros per day to process an asylum seeker there, with all expenses being covered by the government. Accommodating refugees in these facilities costs about 15,000 euros per person per year, Repo added.

Meanwhile, over half of the respondents of an opinion poll conducted by Taloustutkimus believe that the majority of migrants will be unable to secure employment and will resort to living on welfare, thus creating an additional strain on the country’s struggling economy. About a third of the respondents did not agree with this forecast.

Additionally, about two thirds of the respondents said that they don’t believe that migrants pose a threat to the Finnish cultural and ethnic identity.
The poll was conducted by Taloustutkimus for Yle, with 1,001 respondents from various age groups participating.