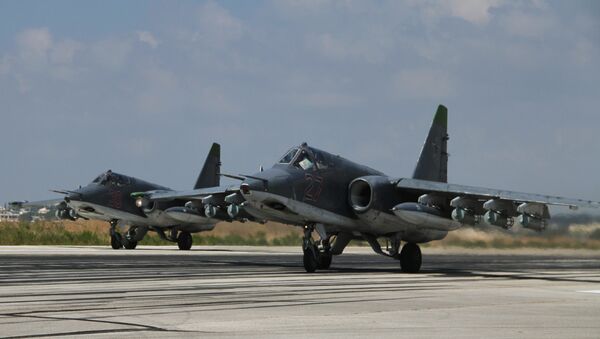 In a forest area near Idlib, a hidden terrorist base was detected, the Defense Ministry spokesman said. There were about 30 automobile and armoured vehicles including T-55 tanks seized from the Syrian army earlier.

In addition, Russian Su-24M bombers have completely wiped out an Islamic State command point near the Syrian city of Al-Rastan.

"As a result of a direct hit, the object was completely destroyed," Konashenkov said.

Three facilities used by ISIL terrorists were also hit near Talbiseh in the Homs province.

Altogether, the Russian air group deployed in Syria struck nine Islamic State facilities over the past 24 hours. Russian Su-34, Su-24M, Su-25 jets completed a total of 25 sorties from the Hmeymim airbase, according to the ministry.

000000
Popular comments
Russia needs to supply Syria with a long range weapon that will knock out the 14mbpd Qurayyah salt water injection plant and with it 8.5mbpd of saudwahab oil production from Ghawar and Khuwais fields, and the money that is financing the cannibals. The price of oil will also double overnight to pay for ALL of Russia expenses as a bonus.