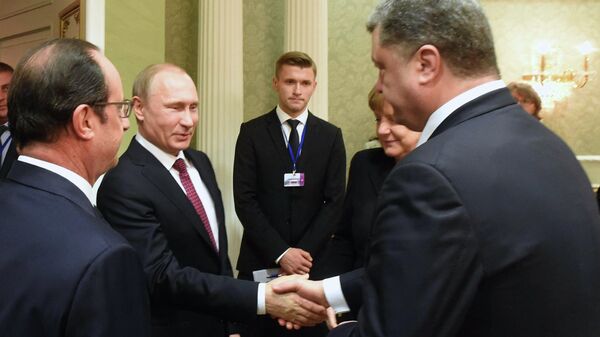 © AP Photo / BelTA, Andrei Stasevich
Subscribe
International
India
Africa
The heads of state of the Normandy Quartet countries are scheduled to meet in Paris on Friday to assess the progress made in the Minsk peace agreement.

A source in the German government told RIA Novosti on Thursday that the summit’s main objective was to overcome existing obstacles to the Minsk ceasefire deal and to discuss additional measures to ensure adherence to it.

Putin said at a meeting of the Russian Council for Civil Society and Human Rights that he expected the Minsk deal to be implemented in full. He said that to achieve any compromise between the Ukrainian government and the Donbass militias direct dialogue between the sides was required.

A French government source added that the two leaders would discuss Russia’s latest anti-ISIL airstrikes in Syria and might broach the subject of anti-Russia sanctions.

Putin is expected to hold bilateral meetings with Hollande and Merkel, but Kremlin spokesman Dmitry Peskov ruled out talks with Poroshenko.

In early September, Poroshenko stated that the ceasefire in eastern Ukraine was being observed, signifying that the Minsk agreements were finally taking hold. The sides also recently signed an agreement to withdraw tanks and weapons less than 100-mm in caliber.

The latest United Nations estimates, released on Wednesday, put at over 8,000 the number of people who have died in the Ukrainian conflict since it erupted in mid-April.