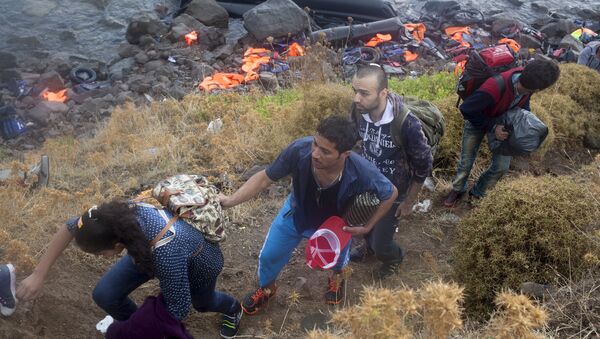 PACE Adopts Resolutions on Dublin Regulation, New Migration Challenges
STRASBOURG (Sputnik) — A Parliamentary Assembly of a Council of Europe (PACE) resolution to review EU’s Dublin Regulation is one of the most progressive documents recently adopted by European institutions to tackle the migrant crisis, an Italian lawmaker told Sputnik on Wednesday.

The Dublin Regulation requires refugees request asylum in the first EU country in which they arrive. The law caused controversy this year after hundreds of thousands of refugees from Syria streamed into Italy, Greece and Hungary. To address the crisis, the EU advisory body passed a resolution on Tuesday urging the review of the Dublin rules.

"This is the most progressive document that has been adopted by a European institution on the crisis of refugees. I think in our times, we have matured for the revision of the Dublin regulation," Michele Nicoletti, who prepared the resolution, told Sputnik.

PACE to Discuss Response to European Migration Crisis on Tuesday
He underlined that many European governments recognize the regulation is "totally dysfunctional" and the time for revision has come. He called on European lawmakers to mount pressure on their national parliaments and governments.

Most of the refugees in the current migrant stream come from Syria, where the UN estimates over 11 million people have been displaced since the start of the 2011 civil war. An estimated four million have fled the country.

"Syria is the clear demonstration that one of the strongest reasons for this refugee crisis is the political reason… So the international community and especially the European Union has the responsibility to act," Nicoletti stressed.

Four and a half years of the Syrian civil war have killed some 250,000 people. In response to a request for help by the Syrian government Russia began airstrikes against extremist positions in the war-torn country Wednesday.