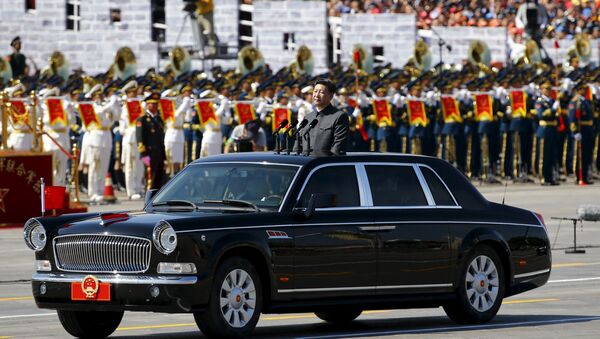 © REUTERS / Damir Sagolj
Subscribe
Chinese President Xi Jinping is on his first state visit to the US since becoming head of state, which is set to culminate with his address at the US General Assembly; Russian political analyst has attempted to reveal what his message to the world might be, one which he believes was already made clear on the day of the Victory Parade.

On September 3, China launched a grand military parade commemorating the 70th anniversary of Japanese surrender in World War II and the victory of the Chinese people’s resistance against Japanese aggression. 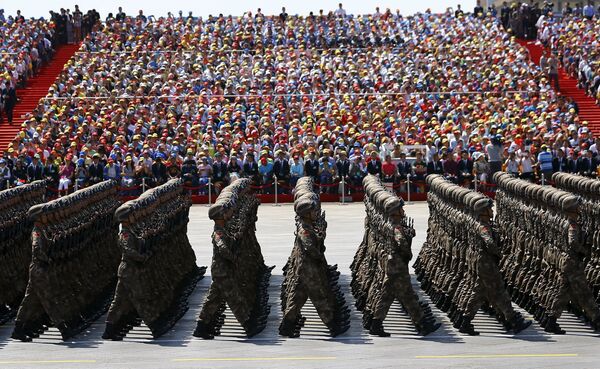 Igor Denisov, a senior research fellow at the Center for East Asian and Shanghai Cooperation Organization Studies, as well as the Institute for International Studies at the Russian Foreign Ministry’s MGIMO University, has attempted to reveal the true meaning of the event. Here are his conclusions.

The parade united two dimensions – a global one and a domestic political one, he wrote in his article for the website Lenta.ru. 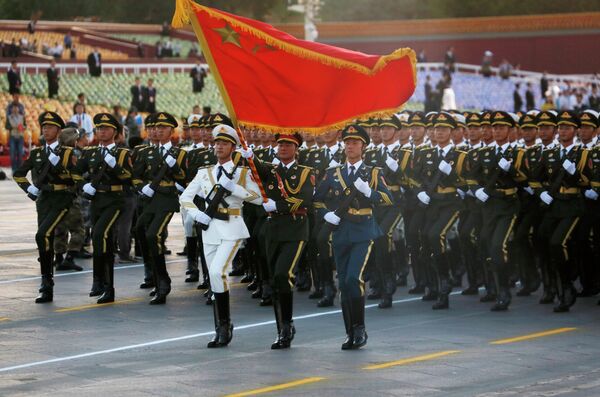 On that particular day, the Chinese remembered the bloody multi-year struggle for their territory, which, to a large extent, shaped the country’s development in the 20th century. At the same time, the country’s leadership was stressing that the events which took place in the Chinese theater of the war were an important aspect of the Second World War and that China is one of the creators of the post-war order.

Military parades, Denisov explained, hold a special place in the Chinese hierarchy of symbolic political events. In modern-day China, parades are a rare occurrence: there have been only three of them since 1960 – in 1984, 1999 and 2009. 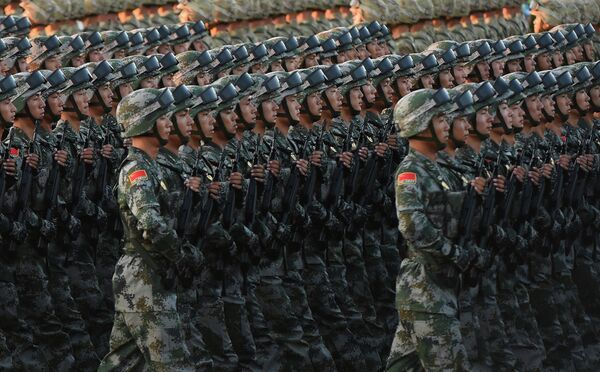 Chinese soldiers conduct a practice at dawn ahead of a military parade later in the morning at Tiananmen Square in Beijing on September 3, 2015, to mark the 70th anniversary of victory over Japan and the end of World War II
© AFP 2021 / GREG BAKER

Notably, all of them marked the country’s main national holiday — the founding of the People's Republic in 1949. According to the set rule, the next one should have been scheduled only for October 2019, to mark the country's 70th anniversary.

Thus, he said, by deciding to hold an “unscheduled” Victory parade, Xi Jinping acted as a courageous reformer of the steadiest part of Chinese public and political life – political rituals.

The mere fact that this sphere could become flexible and witness some important changes, represents the active attempt of the leadership to find a new base for the unity of the nation. This ideological concept has been referred to as the Chinese dream. 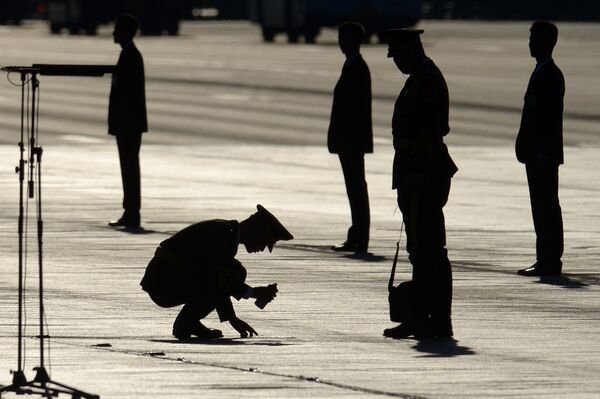 Chinese soldier marks a spot on the ground before a military parade at Tiananmen Square in Beijing on September 3, 2015, to mark the 70th anniversary of victory over Japan and the end of World War II
© AFP 2021 / WANG ZHAO

The basis of the current political trajectory of the country is the “revival of the Chinese nation”, in other words – the creation of a powerful state, which will get the place it is due in the international arena.

Xi Jinping wants his country to fully overcome the so-called damnation of its “hundred years of national humiliation” — the period of intervention and imperialism by Western powers and Japan in China between 1839 and 1949. 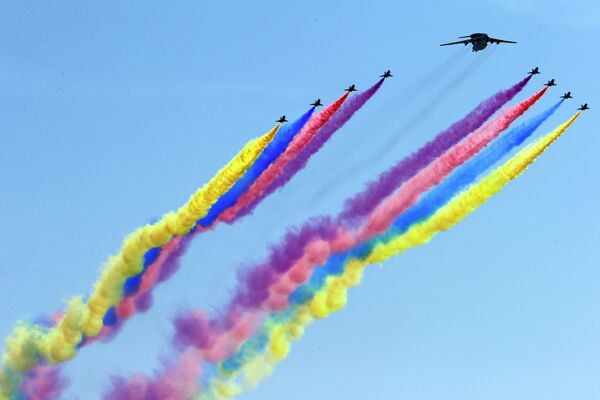 This “long century” lasted 110 years; it began in 1839, when Britain sent gunboats up the Yangtze River to compel China’s rulers to open their ports and markets to the opium trade, at the beginning of what came to be known as the First Opium War. This experience, and subsequent interactions with other Western nations that made similar demands for trade access, marked China’s first sustained exposure to the West, and highlighted imperial China’s military and diplomatic weaknesses in the face of Western power.

By fixating on negative emotions about the past, China was hampered in its attempt to move forward. Thus the Chinese leadership chose the end of the Second World War as a symbol for the launch of the process of overcoming bygone humiliation.

The Symbolism of the V-Day Parade

Nothing was left to chance, Denisov said. The venue for the parade has a special meaning: Tiananmen Square was the place where the founding of the People's Republic in 1949 was announced. All the other symbols were set around it, as if setting a bridge between the past and the modern China. 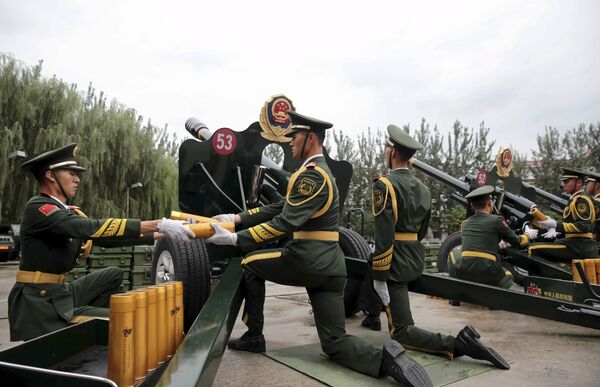 Paramilitary policemen and members of a gun salute team prepare to fire cannons during a training session for the upcoming military parade to mark the 70th anniversary of the end of the World War Two, at a military base in Beijing, China, September 1, 2015
© REUTERS / Stringer

Each step has been devised with meticulous attention to political symbolism, reinforcing a message of national unity under the Communist Party.

Shortly after 10 am, the guard of honor for the flag-raising advanced 121 steps down a red carpet in Tiananmen Square to reach the flagpole, one step for each year since Japan went to war with the forces of China’s Qing Dynasty in 1894. 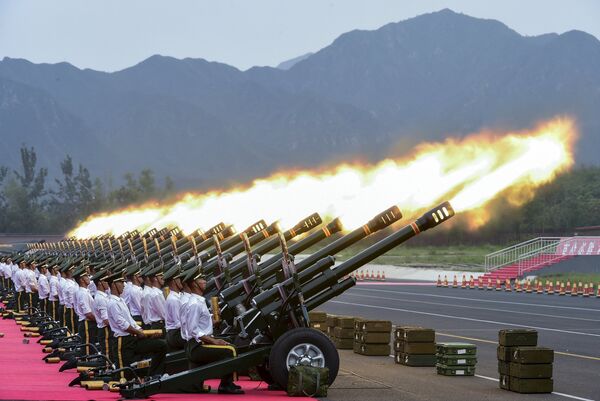 Paramilitary policemen and members of a gun salute team fire cannons during a training session for a military parade to mark the 70th anniversary of the end of the World War Two, at a military base in Beijing, China
© REUTERS / Stringer

Fifty-six cannons — symbolizing the unity of the 56 ethnic groups officially recognized by the Chinese government — sounded 70 shots, for each year since the end World War II.

After the parade, 70 doves were released into the air symbolizing that China is not inclined towards revanchism, but rather towards the international harmony.

Thus, Denisov stated, China solved two tasks: a national one – consolidating the nation around former victories and an external one – the refutation of some assertions that China is a “revanchist power”.

The unity of these tasks comprised the major symbolic essence of past celebrations. 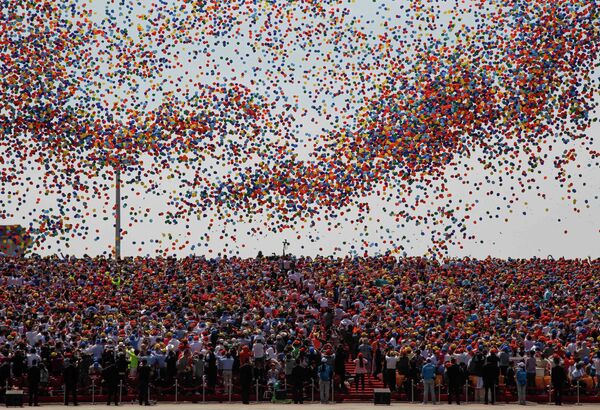