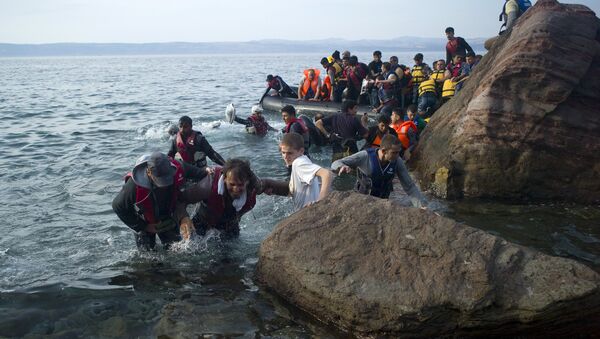 © REUTERS / Dimitris Michalakis
Subscribe
The European Union must work together with Turkey to ease the influx of refugees, the mayor of the Greek city of Lesbos on the eponymous island in the Aegean Sea told Sputnik.

MOSCOW (Sputnik) – “I would like to underline that if the EU does not get involved with Turkey, the problem cannot be managed by any EU country,” Spyros Galinos said in an interview.

Hungary Games: Local Mayor Threatens Migrants As Country Fences Off From EU
Galinos said that refugees often leave Turkey and cross the Aegean Sea and that Lesbos is one of the most accessible places to reach and one of the initial arrival points in Europe. The mayor has called on all EU members to take on the refugee burden, but they also need to work with Turkey so that the refugees are registered there first and then are sent directly on to their desired destinations within the EU.

“The EU will have to decide that all the member states will have, in accordance with its possibilities, to accept its part of the burden and undertake responsibilities for this part. This means that they have to coordinate their actions with the Turkish government, so that the registration of the refugees happens in Turkey. In this case, after the people have expressed their desirable destinations, they should be directly transported there from Turkey by air, train or sea,” Galinos said.

Human Trafficking of Refugees Into EU Must Stop

The European Union has the responsibility of stopping human trafficking of refugees into Europe, otherwise it becomes an accomplice in the crime, the mayor told Sputnik.

“We need to hurt the circles of the traffickers who horribly make use of the refugees by making them pay enormous amounts of money for taking them to Europe by passing the Aegean Sea and it is the responsibly of Europe and the world community to stop these traffickers,” Spyros Galinos said.

Galinos said another reason to uproot the human trafficking problem is the number of deaths, most due to drownings of desperate refugees crossing the Aegean Sea in overcrowded and shabby vessels.

“Secondly, by doing this we save lives because as you know, many people have drowned in the Aegean. Right now what is happening in the Aegean is a pure crime, which we are merely observing. If the world community is not doing anything to stop it, then we are an accomplice in the crime.”

Germany closing its borders in response to the huge influx of Syrian refugees is puzzling, the mayor of the Greek city of Lesbos on the eponymous island in the Aegean Sea told Sputnik.

“[German Chancellor Angela] Merkel’s first decision [to open the borders] was in the right direction. I do not know what the reasons are for closing the border,” Spyros Galinos said in an interview.

He said that it would be understandable if Germany closed its borders temporarily in order to organize and redirect refugees to other cities within the country and then reopen the borders.

“It is one thing if they are closing the border to have their time to distribute the refugees among German cities because if 800,000 people go to Germany in one day, they will face an enormous problem. In other words, if they are temporarily closing the borders to solve some organizational matters, I would say it is correct. But I do not have any exact information on the reasons they are doing it,” Galinos said.

Two new housing centers for refugees arriving on the northeastern Greek island of Lesbos are currently being built, the mayor told Sputnik.

More than 7,000 refugees have arrived in the capital of Lesbos, Mytilene, over the last three days. Most of them were initially housed in an overcrowded makeshift camp.

"We have been facing this enormous problem for seven months already… We are now constructing two more centers in the suburbs of our capital, so that we can provide the best conditions to the refugees, and at the same time to avoid discomfort among our [local] population," Spryos Galinos said.

Assessing the help provided by other European countries in dealing with the refugee influx, the mayor pointed to the lack of consensus on the issue within the bloc.

"Europe continues in the same vein, without a single policy to manage the problem. They are discussing, and discussing things, they ask questions, but I cannot see that they are moving in the right direction," Galinos stated.

The mayor told Sputnik that he had come up with a proposal to tackle the refugee crisis, which presupposes local, national and EU levels of competence.

"But the third level, the EU level is the most important one, everything depends on the way the European Union will manage the situation," Galinos said.

Greece is one of a number of EU member states struggling to cope with a massive inflow of refugees from conflict-torn countries in the Middle East and North Africa.

European Commission President Jean-Claude Juncker unveiled, on September 9, a new migrant quota system under which Europe will accept 160,000 migrants over two years, in the context that 200,000 migrants are estimated to have arrived in Greece so far in 2015.

Police Special Forces, Migrants Clash Over Ferry Access in Greek Lesbos
The Greek island of Lesbos, struggling, alongside with the whole of the country, to cope with a massive inflow of refugees, has managed to increase the number of tourists visiting its resorts despite the crisis, the mayor told Sputnik.

“The way our island is handling this pan-Eureopan problem, is an additional reason for more tourists to come and visit us,” Spyros Galinos said.

He added that the refugee crisis has not affected the beauty of the island.

“Moreover, now the island has become even more beautiful, because we have humane people who live here, who are ready to help the people who come here, escaping war, understanding that they are in more need than we are,” Galinos stressed.

He added that the island welcomes tourists from Russia and seeks to develop warm relations with the country.

“Next year is the year of Greek-Russian friendship and we will work toward cooperation between our nations,” the mayor pointed out.

Greece is striving to prevent any manifestation of racism toward the refugees who are fleeing violence in their home countries and arriving in Europe, the mayor told Sputnik.

"We are avoiding the development of a racist movement, that could be stirred up by all this disturbance, and in some regions, we can see that the attitude to the refugees is entirely based on racism," Spyros Galinos said.

According to him, it is the European Union’s duty to stop the promotion of such movements and race-related hate crimes.

Two Arrested for Molotov Cocktail Attack on Migrants on Greek Lesbos Island
"I am against any racist actions committed against the refugees, who left their houses and are asking us to help them to save their lives," Galinos stressed.

The European Union sees steady rise of intolerance toward refugees seeking a better life in the bloc.

Both have been charged with a number of criminal offenses, including violating laws on weapons and explosives, racism, and causing bodily harm.