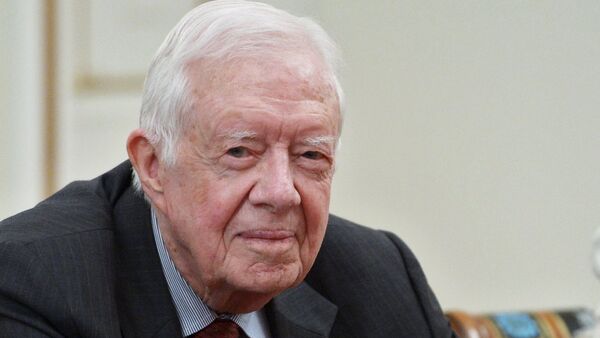 © Sputnik / Aleksey Nikolskyi
/
Go to the photo bank
Subscribe
The 39th President of the United States, Jimmy Carter, has become the latest politician urging the United States to join forces with Russia and Iran in order to find a solution to solve the protracted Syrian crisis.

Carter considers finding a solution to the deadly conflict, which has left over 220,000 people killed and more than 7.6 million displaced, to be the first major step on the path to tackling the overwhelming influx of refugees from the Middle East and elsewhere.

"The best thing obviously is to deal with Syria," since the majority of refugees come from this country, the former president said at an annual event held at the Carter Center.

#JimmyCarter: We now have more refugees from war zones on Earth than we have ever had in history #CarterTownHall

"We now have more refugees from war zones on Earth than we have ever had in history even after the Second World War. About the fourth of the total population of Lebanon now are refugees from Syria. Jordan is also heavily afflicted with it. Turkey has also taken a lot of those refugees," he explained.

The worsening refugee crisis in Europe prompted many politicians and experts to call on the US to abandon its current approach to dealing with Syria. Washington still maintains that peace in the war-torn country is only possible if President Bashar al-Assad resigns.

Carter referred to this stance as erroneous but seemed to hint at the possibility of the Obama administration altering its strategy.

"The United States, I think, mistakenly at first excluded any possibility of President Assad being involved in deciding what would happen to [Syria] in the future. … On the other hand, as you known, Russia and Iran have supported the Assad government and now ISIS has basically taken over good portion of the eastern part of Syria," Carter noted, referring to Islamic States militants.

US cooperation with Russia should not be limited to Syria.

Carter asserted that Americans need "to get on the same side whenever we possibly can with Russia and also with China by the way to promote peace in the world and harmony and future economic development for everybody."

It's ok for western countries to aid and support terrorists within Syria but when Iran & Russia help Syrians inside of Syria it's wrong?