Registration was successful!
Please follow the link from the email sent to
https://sputniknews.com/20150915/flamethrower-magazine-impression-1027024305.html
Hell on Earth: Russian Heavy Flamethrower Shocks Viewers
Hell on Earth: Russian Heavy Flamethrower Shocks Viewers
The burning projectile fired by Russia’s TOS-1A heavy flamethrower system during a recent drill near Volgograd is capable of making life a living hell for the... 15.09.2015, Sputnik International
2015-09-15T12:50+0000
2015-09-15T12:50+0000
2015-09-15T13:19+0000
/html/head/meta[@name='og:title']/@content
/html/head/meta[@name='og:description']/@content
https://cdnn1.img.sputniknews.com/img/102702/59/1027025937_0:245:3188:2048_1920x0_80_0_0_f09b176f25d3f6a9add54816249063e3.jpg
choticastile
Hope a situation never arises, where Russia has to employ this lethal machine! I find it soul destroying that in a modern world. the need for these horrific WMD to protect one country from another, still exist. Sadly, the parties responsible for this terrible state of affairs, are the global bankster cabal and their US military industrial complex, which bankster owned, controlled and financed, to implement their age old monstrous Machiavellian agenda of full spectrum global dominance -- nothing but an agenda devised by Satan, it should be banished from the face of this Earth. It is the existence of this deadly and archaic global menace, which resulted in an Arms Race --) :- Which gave birth to US hegemony and its aim to dominate, rule and control the whole planet, its insanely stubborn refusal to accept the accomplishments of other countries, specifically, Russia -- which it always regarded as an Enemy, blocking its agenda of madness and which therefore have to be vanquished. Tragically -- an IMAGINARY FEARED Enemy!! -- as Russia, a country promoting global peace and cooperation, had no option over many decades, but to defend herself against the US' ongoing vicious aggression and on a par with the US, continue the production of ever more sophisticated weaponry of death and destruction in order to protect not only Russia, but increasingly, the world from the US' intolerably, unholy ambitions. Unless the dark and evil global banksters, the real fiends behind the ongoing ungodly circle of global aggression and wars -- along with the Big Corps they own and control, are dethroned and defeated, our world will be doomed to utter chaos and the extinction of humankind. May the Almighty God help us all!
1
mos 8541
In a harbor full of various submarines from different countries, how can you tell which submarine is the CHINESE SUB?..... Its the one with the SCREEN DOOR LEFT OPEN!!
0
4
russia
Sputnik International
feedback@sputniknews.com
+74956456601
MIA „Rosiya Segodnya“
252
60
2015
Sputnik International
feedback@sputniknews.com
+74956456601
MIA „Rosiya Segodnya“
252
60
News
en_EN
Sputnik International
feedback@sputniknews.com
+74956456601
MIA „Rosiya Segodnya“
252
60
1920
1080
true
1920
1440
true
https://cdnn1.img.sputniknews.com/img/102702/59/1027025937_0:45:3188:2048_1920x0_80_0_0_e90e731db5647a3d25f1183f61483427.jpg
1920
1920
true
Sputnik International
feedback@sputniknews.com
+74956456601
MIA „Rosiya Segodnya“
252
60
Sputnik International
feedback@sputniknews.com
+74956456601
MIA „Rosiya Segodnya“
252
60
world, russia, news, military & intelligence, russia, omsk transport machine factory, tos-1a 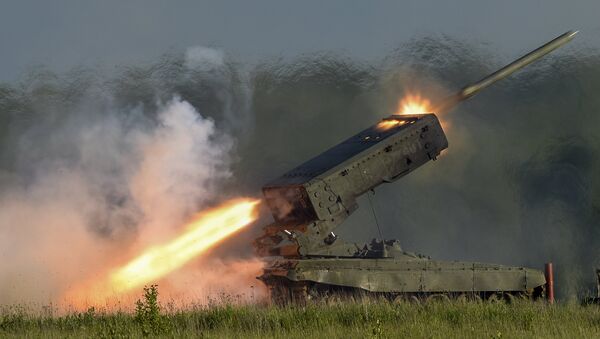 © Sputnik / Alexander Vilf
/
Go to the photo bank
Subscribe
The burning projectile fired by Russia’s TOS-1A heavy flamethrower system during a recent drill near Volgograd is capable of making life a living hell for the enemy, a US science and technology magazine wrote.

Thermobaric rockets are a "fuel-air" weapon system. When fired, the rockets disperse a cloud of flammable liquid into the air around the target, and then ignite it.

“The results are devastating — not only is the explosion significantly longer and the shockwave significantly hotter and stronger than a conventional warhead, but all the oxygen in the near vicinity is also consumed, creating a partial vacuum. This makes them horrifying weapons to use against infantry and entrenched personnel in bunkers and caves—exactly what the TOS-1 was designed for,” Popular Mechanics noted.

“A full salvo of the system’s 24 rockets will make a rectangle 200 meters by 400 meters – a bit more than eight city blocks – hell on earth for anyone caught inside.”

It was designed for defeating enemy personnel in fortifications, in open country, and in lightly armored vehicles and transport. First combat tests took place in 1988-1989 in Afghanistan.

The combat system, which consists of the combat vehicle, rockets, and loading vehicle, was developed in 1979 by the design bureau of the Transport Machine Factory in Omsk and was named TOS-1. It remained a secret development for a long time.

choticastile
17 September 2015, 11:58 GMT1
000000
In a harbor full of various submarines from different countries, how can you tell which submarine is the CHINESE SUB?..... Its the one with the SCREEN DOOR LEFT OPEN!!