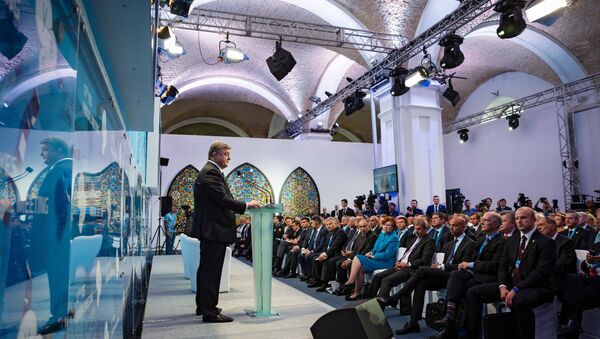 On Friday, speaking at the Yalta European Strategy forum, Ukrainian President Petro Poroshenko appeared to hint at the possibility of renewing Kiev's military operation in Donbass. Later the same day, he told journalists that he said nothing of the kind, and that his words "may have been mistranslated." So what did the president really say?

Opening the forum in Kiev, given that Yalta has since returned to Russia after the Crimean peninsula broke off from Ukraine following the Maidan coup, Poroshenko announced, in a speech given in English, that "now it is high time to discuss the possibility to deploy an operation in the Donbass to support due implementation of the Minsk Agreement. It can help us to achieve two key objectives for restoring peace in [the] Donetsk and Lugansk regions: Full withdrawal of the occupation forces, of the Russian forces from Ukrainian territory, and clos[ure] of the Ukrainian-Russian border. These are the two main preconditions for peace and stability in Donbass."

Later in the day, when a journalist asked the president to clarify what he meant about such an "operation," Russia's RIA Novosti quoted Poroshenko to have claimed that he did not make such a statement. "I did not say anything about a liberation operation, excuse me. This may have been an incorrect translation. Thank you for this question."

Appearing to emphasize that the president's claim wasn't really just a case of a broken telephone mistranslation, Ukraine's tv channel 112 highlighted the moment, translating it into Ukrainian, and retranslating it back into English via subtitles, with the message turning out to be nearly identical, confirming the need for "an operation" to support implementing the Minsk Accord.

Poroshenko 'Shocked' at Washington's Prior Refusal to Assist Ukraine
It is not clear at this point exactly what Poroshenko meant, although tough talk about the "withdrawal of occupation forces" (referring to the Donbass militia) and the closure of the Ukrainian-Russian border seems to hint at the threat of force. This sentiment seemed to have been confirmed at the forum itself, with Poroshenko emphasizing that he had asked Ukraine's Trilateral Contact Group representative Leonid Kuchma not to extend the Minsk Agreement to function into 2016.

"No," Poroshenko bluntly noted. "Everybody should fulfill their obligations in the year 2015, because Ukraine pays a huge price for not implementing the Minsk agreement. This is point number one. Point number two [is that] time plays for Ukraine, not for Russia, and this is for sure. Peace plays for Ukraine, not for Russia." The president boasted that Kiev's decision to open a channel for humanitarian aid to the civil war-torn areas had opened residents' eyes to the fact that Kiev was not their enemy.