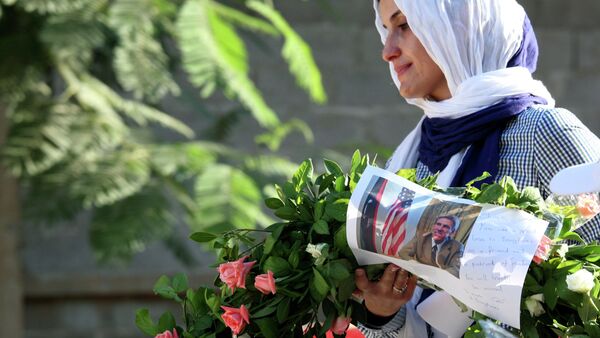 © AP Photo / Mohammad Hannon
Subscribe
International
India
Africa
The US Foreign Serviceis seriously committed to advancing American interests abroad, including in some dangerous places, according to the statement of the American Foreign Service Association (AFSA).

US State Department to Release 5,000 Pages of Documents on Benghazi Attacks
WASHINGTON (Sputnik) — The third anniversary of the attacks on the US diplomatic mission in Benghazi, Libya provides an opportunity to remember the four Americans who were killed and should not be exploited for political gain, the American Foreign Service Association (AFSA) said in a press release on Friday.

On September 11, 2012, Islamic militants stormed the US diplomatic compound in Benghazi, killing Ambassador Chris Stevens and three other US government employees, while injuring ten people.

Then-Secretary of the State Hillary Clinton came under fire for lax security conditions at the Benghazi compound and her handling of the aftermath of the crisis, including potential misuse of e-mail messages, which is being investigated by a Republican-led congressional committee.

"The deaths of Americans as they work on behalf of our country overseas should never be a political issue," the release argued. "As AFSA marks this solemn anniversary, we encourage all involved to dedicate themselves to keeping our personnel safe and secure while allowing them to do their jobs on behalf of the American people."

Clinton to Testify Before US Congress on Benghazi Attacks on October 22
The US Foreign Service, the release added, is seriously committed to advancing American interests abroad, including in some dangerous places.

"We accept the risks that come with this mission and ask in return that the memory of our fallen colleagues be honored by a continued strong American Foreign Service presence around the world," the release noted.

Clinton team's working methods were brought into question after The New York Times revealed that she had used a personal e-mail account in some of her communications on Benghazi instead of her official government account.