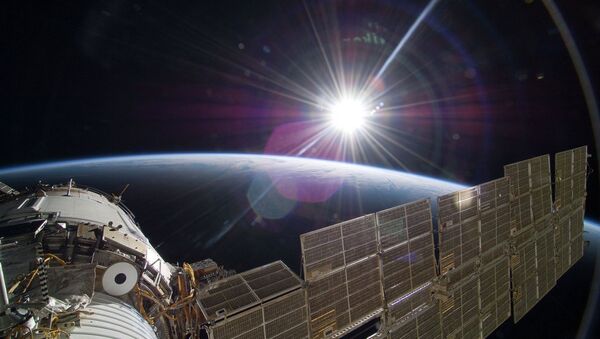 © Flickr / NASA
Subscribe
International
India
Africa
The crew of the International Space Station recently had a chance to enjoy the taste of spicy kharcho soup, mare’s milk and two types of curd brought on board by Kazakh cosmonaut Aidyn Aimbetov.

The arrival of Russia's Sergey Volkov, Denmark's Andreas Mogensen and Kazakhstan's Aidyn Aimbetov brought the number of crew on board to nine, for the first time since 2013.

The Kazakh member of the crew brought a number of national dishes into orbit. Weary of regular space-food consumed via tubes, ISS inhabitants were now able to enjoy the taste of mare’s milk, two types of curd and kharcho soup.

Last month, Japanese company Suntory Global Innovation Center sent a minibar with six liquor samples to the ISS. The whisky maker wanted to see if spirits mature in space the same way as they do on Earth. An identical set of samples was stored on the ground in Japan.

Science & Tech
First Time Ever: ISS Crew Eats Food Grown in Outer Space
The mishap with the Russian Progress cargo ship and the American Dragon forced the ISS crew to start saving food and other staples but the subsequent arrival of a second Progress ship and a Japanese space truck made life a lot easier for the crew who now have everything they need, Russian cosmonaut Gennady Padalka said during a video linkup with Mission Control.