From Existential to Mystical: Tension With Russia Gets Dugin Aspect in West 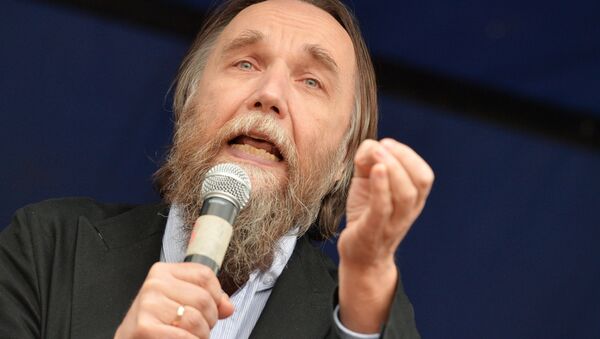 Western countries' diplomatic tensions with Russia took a strange turn with allegations that a man named Aleksandr Dugin is doing everything from spreading international espionage networks to controlling the mind of the Russia's president.

Recent media sound bites about Russia's "existential threat" to the US have gained a much more mystical side in intelligence services and Western media with the re-emergence of Aleksandr Dugin, a Russian philosopher and activist.

The "existential threat" sound bite was voiced by several US generals, generally in terms of mutually-assured destruction in case of nuclear war, the sound bite appears to have spread to the philosophical definition of the word. In the world of political commentary, however, it has turned into a return of Dugin to the Western press, sometimes under the moniker of "Putin's brain."

"[Philosopher Leo] Strauss himself admitted that the most profound source of those philosophical currents, Martin Heidegger — "Putin’s brain" has written four books on him — destroyed every possibility for a rational liberal philosophical outlook, the kind we might like to have available to support practical liberal political principles," political analyst Michael Millerman wrote in Canada's National Post daily.

The Czech Republic's BIS intelligence service recently alleged that a new "Comintern" based on Dugin's idea, calling it the "New Reincarnation International" which Russia could apparently use for espionage. The Comintern, or the "Third International" was an international organization of communist parties founded in the Soviet Union in 1919 and disbanded in 1943.

"Russia, in the opinion of BIS is building in Europe a structure ideologically leaning on expansionist Duginist neo-Eurasianism (which is in a way acceptable to the entire European political spectrum from extreme left through the populist extreme right), which can be considered a return to the concept of the Comintern (aka Communist International aka the Third International), established and used Soviet Union," the report said.

Dugin himself is a fairly marginal figure in Russia itself, a former member of two now-banned organizations, Pamyat and the National-Bolshevik Party (NBP). Dugin split from the NBP to form his own "Eurasianist" movement in 1998, accusing the group of being more about drinking beer and lifting weights than political change.

Since then, he has occasionally surfaced in the media, often branded as being supported by the government. The spikes in Dugin mentions appear to be around the time of political protests in Ukraine and Russia.

One of the strangest Dugin-related trends is his label as a person with ties to the Kremlin, often even Russian President Vladimir Putin himself, although the allegations appear shaky at best. Dugin's period of greatest political prominence appears to be between 1998 and 2003, when he left the NBP to become an aide to Communist Party legislator Gennady Seleznyov.

Last Words? Ukraine Bans Dozens of Russian Books
The details of the appointment are not clear, although they appear to be connected to Dugin's role in the 1996 presidential election, when he successfully distanced the radical NBP from then Communist Party presidential candidate Gennady Zyuganov.

Zyuganov was then often accused in the media of radical views, such as plans to carry out mass executions, particularly by the "God Forbid!" newspaper, since then labeled as being "Goebbels-like propaganda," written by journalists of business daily Kommersant.

Since 2003, when Seleznyov's own party failed to enter Russia's legislature, Dugin was largely on his own, forming the Eurasian Youth Union together with his followers from the NBP. The organization surfaced in news reports around times of political protest in Russia and Ukraine, but other than that remained fairly marginal.

Dugin's most recent mention in official documents has been his placement in the US Treasury's sanctions list in March 2015. According to the press release of the list, Dugin's group "actively recruited individuals with military and combat experience to fight on behalf of the self-proclaimed DPR and has stated that it has a covert presence in Ukraine." No further details or even allegations of government ties are made.

Such "threats" from mystical views of Dugin to "Russian propaganda" which is apparently "being credited with almost magical powers of penetration and persuasion," make it appear as though the West is facing an existential crisis much more than an existential threat.

As such, talks have shifted to what Peter Pomeratsev called the "psychosphere," at the same time as an increasing amount of attention is being paid to "KGB psychics" apparently guiding Russian policy. The apparent obsession with "information warfare" also seems to be a new driver in Western foreign policy.

An article by two members of the influential German Council on Foreign Relations (DGAP) appears to confirm this, by suggesting "counter-measures" with no clear goals. In their article in Cicero Magazine, Stefan Meister and Jana Puglierin similarly focus on "information warfare" over diplomatic solutions to the existing tensions.

"The BBC should extend its Russian service as a serious alternative to Sputnik," the article said.

The mystical-parapsychological turn itself begins to arouse suspicions whether "Russian propaganda," which appears to be a mix of Dugin's philosophy, "magical powers" of television and conflicts in the "psychosphere," has already penetrated the minds of Western ruling elites and policy circles.