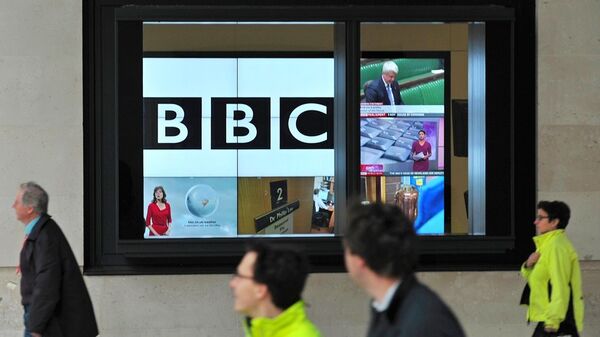 Britain's BBC said it would seek government funding for the expansion of its international broadcasting, including the creation of a Russian-language television channel.

Britain's BBC is planning to launch a Russian-language TV channel as it seeks to expand state funding of the service, British media reported on Saturday.

According to a statement released to several UK media outlets, the state-funded network plans an expansion to multiple countries, as part of its view of "Britain's place in the world" and its "traditions and values." The network also said that it seeks to "uphold global democracy" through what it called "impartial" news.

"There should no longer be any no-go countries for the World Service – it is Britain’s impartial voice to the world," a statement by the channel released to multiple UK media outlets said.

Propaganda for Sale: BBC and Others Guilty of Broadcasting Breaches
The BBC was previously found in breach of Britain's own broadcasting regulator, and the BBC's international channel BBC World News alone was cited for 20 violations of impartiality over four years. For comparison, Russian international broadcaster RT has been accused of 10 violations by the same regulator over nine years.

If the British regulator's standards are anything to go by, this makes the BBC's international broadcaster at least four times more impartial than RT.

"There should no longer be any no-go countries for the World Service – it is Britain’s impartial voice to the world," the statement added.

The statement released by the BBC also said that it seeks to "uphold global democracy" through its broadcasts, although it did not specify further details.

"The BBC has never been impartial on the importance of democracy and a free press. We have a strong commitment to uphold global democracy though accurate, impartial and independent news. That’s why the BBC World Service is such a trusted and in some cases revered news source," the statement said.

Former Chair: BBC Caved in, Should've Stood up to Government Demands
The plan seeks funding from the British government, which funded the network's international broadcasting until 2010. Another source of funding is a government-mandated license fee, which British households with televisions are forced to pay to the broadcaster.

The BBC spent $385 million on its international broadcasting in 2014, all funded by British households. For comparison, RT's budget amounted to $278 million in figures cited by the Independent.

Further details of the plan, which would also provide daily radio broadcasting to North Korea (a country which notoriously jams international radio signals), is to be presented on Monday, according to the Guardian.