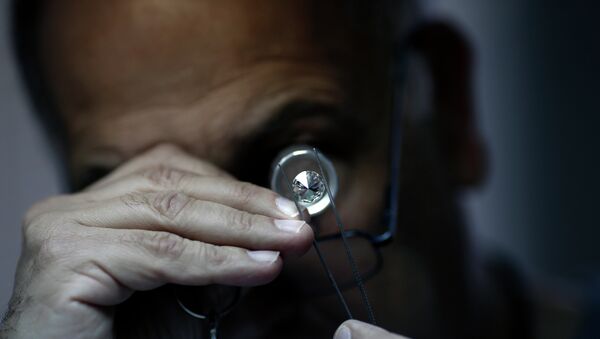 VLADIVOSTOK (Sputnik), Alexander Mosesov — The recent drop in sales and prices in the world diamond industry should be attributed to a regular cyclical development, Ari Epstein, the CEO of Antwerp World Diamond Centre (AWDC) told Sputnik on Thursday.

"We are not among those who have been calling [a challenging year for the global diamond industry in 2015] a ‘crisis’. That word makes for dramatic headlines, but is often overused, especially when the so-called crisis is really just a cyclical development that will receive its appropriate reaction," Epstein said.

According to Epstein, diamond demand will eventually pick up, particularly when the Chinese economy stabilizes after its stock market plummet.

New Type of Large Diamonds Found in Frozen Lava in Russia
Russia has strengthened its position in the diamond sector despite the country's economic difficulties, Ari Epstein, the CEO of Antwerp World Diamond Centre (AWDC) told Sputnik on Thursday.

"Despite the difficulties currently faced by the Russian economy, Russia still managed to strengthen its position in the diamond market, overtaking Botswana as the number one diamond producer in terms of volume as well as value. So if anything, Russia’s role has changed for the better, though it is still vulnerable to forces outside its control," Epstein said.

According to Epstein, the Russian diamond manufacturer Alrosa’s second quarter figures published on August 28 showed revenue up 20 percent as well as a decrease in debt of 20 percent.

Russia has the largest known diamond deposits in the world and Alrosa accounts for 97 percent of the country’s production.

Global diamond prices significantly decreased in the first half of 2015, with major diamond manufacturers, De Beers and the Russian Alrosa, reporting a 9 percent and 23 percent decline in sales respectively.