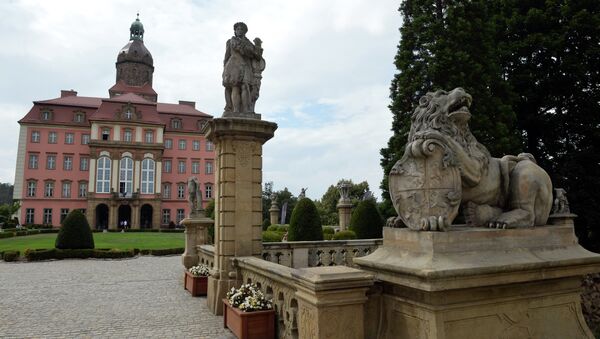 © AFP 2022 / JANEK SKARZYNSKI
Subscribe
Poland’s Deputy Minister of Culture, Piotr Zhuhovsky, said that the gold of the Third Reich, which was found in the German armored train of the Second World War, will pass into the possession of the State Treasury unless a legitimate contender comes forward, Russian news service reports.

However, an interested contender has stepped forward. The head of the World Jewish Congress, Robert Singer, believes that the gold may have belonged to the Jews which were killed in concentration camps, and therefore “should be transferred to their heirs.”

In the absence of heirs, Singer promised to transfer the gold to the organization of Polish Jews as “the state did not compensate for their suffering and economic losses during the Holocaust,” agency NEWSru.Com reported.

Treasure Hunters Claim Discovery of 'Nazi Gold Train' in Poland
It is estimated that during the course of the Second World War, Nazi Germany looted approximately $550 million in gold from the governments of the countries it occupied.

In addition, the Nazis took gold from individuals, particularly victims of the holocaust, who were searched in concentration camps for gold, including their gold teeth.

A Pole and a German claim to have found a legendary Nazi gold train in Poland, 70 years after it pulled out of Wroclaw (formerly the German city of Breslau) carrying a trove of gold and other valuable treasures back to Germany ahead of the Red Army's advance.

Instead of arriving at its planned destination of Swiebodzice, it is alleged that the train was lost without a trace in the mountains around the town of Walbrzych, the same region in southwest Poland where the two men now claim to have found it.