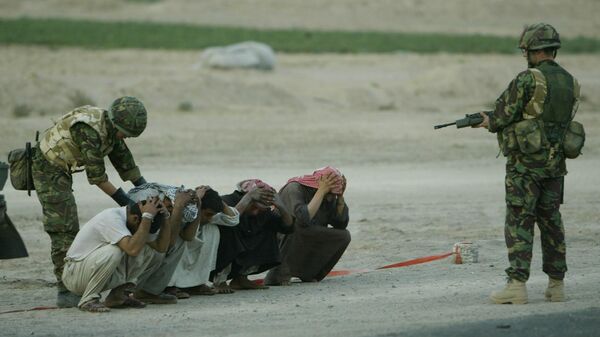 Six years after a probe began into the background of UK Prime Minister Tony Blair’s decision to follow the US into the invasion of Iraq in 2003, sources close to the inquiry say many of Blair’s allies and officials may be in for blame.

Calls for Blair to Face War Crimes Trial Over Iraq Invasion
The decision to join the US in the invasion of Iraq in 2003 proved controversial, with a complete failure to get international agreement for a UN Security Council Resolution clearly backing the invasion. The UK Prime Minister at the time, Tony Blair, came in for criticism for his close relationship with the – then – US President George W. Bush and there has been pressure ever since to uncover what the two men agreed to do and when.

The central issues in the run up to the invasion were Iraq’s alleged ownership of weapons of mass destruction and the pressure for regime change to topple the Ba'athist government of President Saddam Hussein.

The issue caused a massive demonstration against invasion in the UK and Blair has faced continuing criticism over the decision to go to war — and whether he had received advice that it was illegal.

Finally, in 2009, his successor as Prime Minister, Gordon Brown, ordered an inquiry into the run-up to the invasion, under Sir John Chilcot.

The inquiry heard evidence from 2009 until 2011, but has yet to report – a subject of deep controversy, with allegations of a cover-up. All participants in the inquiry – government officials and politicians have been given the chance to pre-read the judgement of the inquiry and respond to any criticism. However, many believe the process has gone on too long and the report should be published.

While it had been largely expected that Blair would shoulder much of the criticism, it has emerged that a wider group of people have been criticized in the report – adding to the delay in its publication.

US, UK Invasion of Iraq Behind ISIL Rise – Veterans for Peace
One of those rumored to be in for criticism is the former Foreign Secretary Jack Straw who admitted to the Chilcot Inquiry: "The question of whether to go to war has also been one of the most divisive, certainly in my political lifetime. It made many people very angry at the time, and subsequently. That – and the failure to find any weapons of mass destruction has undermined trust."
Straw maintained that to go to war for reasons of regime change alone was illegal, but backed the government because Hussein was capable of using weapons of mass destruction, none of which were ever found.

However, the Attorney General at the time, Lord Goldsmith is believed to have said any invasion without a clear UN mandate would be illegal and claimed he had told Straw so in a telephone conversation.

He said: “The Government must not, however, fall into the trap of believing that it was in a position to take action which it could not take. Nor must [the UK Government] promise the US Government that it can do things which the Attorney considers to be unlawful," a note of their conversation reads.

Ex-UK PM Tony Blair Takes Up Yet Another Role: This Time, Anti-Semitism
Another in line for criticism is the former head of the MI6 intelligence agency, Sir Richard Dearlove, as well as Sir John Scarlett, chief of the Joint Intelligence Committee (JIC). The agency provided background intelligence on which Blair’s team made its decisions.
However, in the Butler Report, which investigated the background intelligence, concluded that: "We detected a tendency for assessments to be colored by over-reaction to previous errors. As a result, there was a risk of over-cautious or worst case estimates, shorn of their caveats, becoming the ‘prevailing wisdom’. The JIC may, in some assessments, also have misread the nature of Iraqi governmental and social structures."

As delays to the publication of the Chilcot report continue, it appears it’s not only Tony Blair who is in the firing line, but his acolytes too.