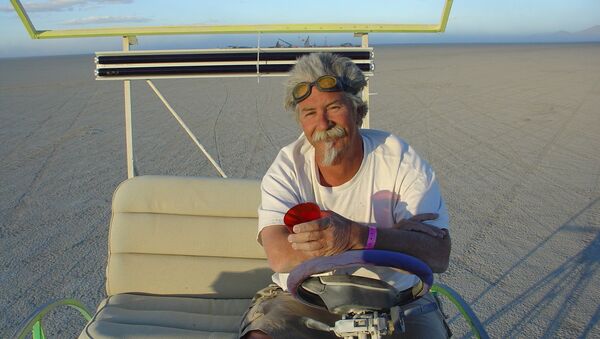 © Burning Man Blog
Subscribe
A ten-year staffer for the Burning Man festival has died from unknown causes at the site of the annual festival. He was on site preparing for the event which begins on August 30.

Scott "Spoono" Stephenson was a Nevada resident who has been working with the Burning Man Department of Public Works for the past decade.  He is said to have been in his late 50’s, and the official Burning Man blog has stated that he died from natural causes.

Stephenson had reportedly been in the desert working on the construction of Black Rock City since April, a temporary city that pops up for the festival annually in the desert approximately 150 miles from Reno.  The week-long event was attended by almost 66,000 people last year.

“Spoono has been a fixture of our DPW since 2005,” Burning Man CEO Marian Goodell said in a statement. “In 2005 he was one of the first to depart for Mississippi to help residents in the wake of Hurricane Katrina, working, among other things, as a cook for the team that grew to become Burners Without Borders. He will be missed by many of us including myself.”

Burning Man organizers are providing support and grief counseling to staff and volunteers who are currently at the location.

“Spoono embodied the best of Burning Man values and culture. He was generous to a fault, giving all that he had to the community he loved. He will be missed by all who knew him,” the Burning Man Blog stated.

The blog author also wrote that a plan for a celebration of his life as well as a memorial service, presumably on the playa, will be announced shortly.

Pershing County Sheriff's Sergeant Mike Stephens has only confirmed to press that someone died at the site, but would not specify the cause of death stating that it is currently under investigation.