Politician Explains Why the French Are Moved to Help Donbass 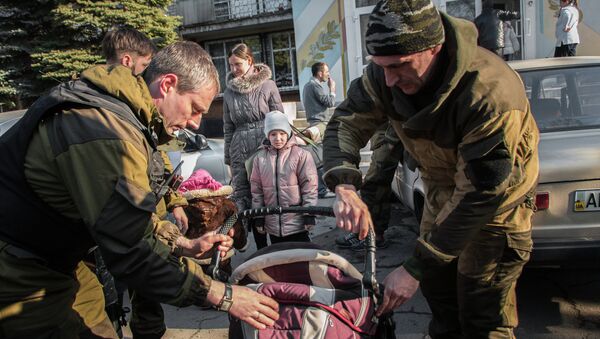 Andre Chanclu, head of the France – Donbass Committee, provides the perspective of the French fundraisers on the Ukraine crisis.

Russia’s 36th Humanitarian Convoy Departs for Donbass
Andre Chanclu, who runs the France – Donbass Committee dedicated to helping the victims of the conflict in the region, shared with Sputnik the view from France of the Ukraine crisis, and his motivation for wanting to aid the residents of eastern Ukraine.

"From the beginning, there is a hypocrisy when they talk about the participation of Russia in the conflict in Donbass. For Russia, this is all very difficult – Ukraine is historically a kindred country," said Chanclu.

Donetsk Republic, OSCE SMM Agree Steps to De-escalate Donbass Conflict
"Today we are witnessing an uprising, fomented by NATO and the Americans. That's not a secret for anyone. To say that Russia is implicated in that affair is a joke."

"When they say that Putin is behind everything, it makes you want to reply, "Tell us please, was Maidan his creation? I don't see what kind of interest there could be from Putin and Russia to play into the hands of a government, financed and run by Washington."

Chanclu and fellow French supporters of Donbass protest outside the Ukrainian Embassy in Paris, on the one year anniversary of the Maidan coup.

As well as running the collective to help the residents of Donbass, Andre Chanclu is also a member of the 'France – Russia Convergences' association, which seeks to "create and maintain bonds of friendship" between the Russian and French peoples.

The France – Donbass Committee carries out fundraising in support of the residents of the war-torn region of Ukraine, and Chanclu has formed links with similar organizations in Germany, Britain, Spain, Italy and Belgium which seek to provide humanitarian aid.