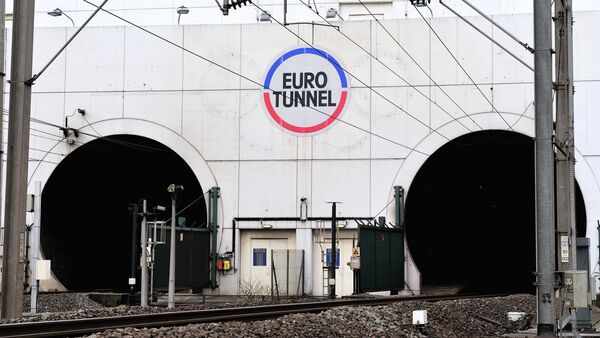 The number of migrants trying to reach UK through Eurotunnel terminal reportedly has decreased to some 150 people a night.

MOSCOW (Sputnik) — The number of migrants trying to reach British soil by using the Eurotunnel terminal near French port Calais has decreased to some 150 people a night, the BBC reported Sunday.

The BBC reported that the Eurotunnel company, which manages and operates the Channel Tunnel between Britain and France, has recently introduced the additional security measures, which resulted in the observed down in the numbers from a high of 2,000 at the end of last month.

Calais Official Blames UK Hypocrisy for Migrant Crisis
In recent weeks, there have been thousands of attempts by refugees to cross the 31-mile tunnel separating the French town of Coquelles, near Calais, from Folkestone, Kent, in the United Kingdom.

Some 4,000 refugees are currently living in abject squalor in camps in Calais.

The United Kingdom erected a 1.2-mile fence around the Eurotunnel rail terminal near Calais to prevent undocumented migrants from entering Britain from that location.

The United Kingdom is experiencing a major wave of immigration, with 641,000 people having immigrated to the country in the year ending December 2014, according to the UK Office for National Statistics data.