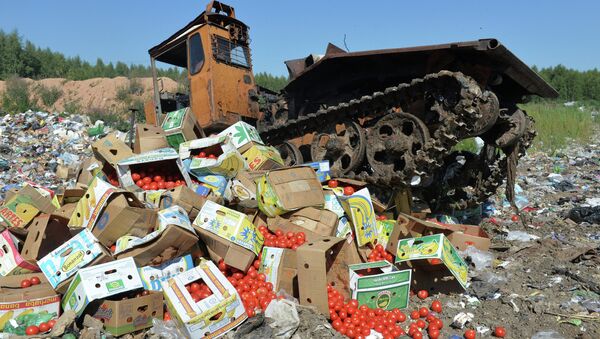 A group of lawmakers from the Communist fraction of Russia's lower house of parliament has introduced a bill aimed at redistributing foodstuffs confiscated under Russia's food embargo to those in need, and as humanitarian aid to conflict zones, the body's press service announced on Thursday.

"Hundreds of tons of foodstuffs are being burned in food crematoriums and destroyed using other methods. Their destruction is an extreme and costly measure. For the purposes of observing the ban on the import of [sanctioned] agricultural production, raw goods and foodstuffs into Russia, their confiscation is sufficient," an explanatory note to the bill noted.

Russia Destroys 290 Tons of Embargoed Food in One Day
The bill's authors say that instead of being destroyed, these confiscated foodstuffs could instead be distributed among the country's poor, to those facing temporary difficulties, and could also be sent as humanitarian aid to conflict zones, such as eastern Ukraine's war-torn region of Donbass.

The draft legislation proposes that agricultural products falling under Russia's food ban would be subject to seizure, becoming the property of Russia. Aiming to quell worries about shoddy food safety standards, the bill notes that products of sub-standard quality would be subject to destruction and recycling.

Measure a Response to Public Discontent Over Destruction of Food

Earlier, Western and Russian media reported heavily on Russians' discontent over a presidential decree stepping into force earlier this month authorizing the destruction of several hundred tons of confiscated embargoed food goods. A petition over at US-based online petition tool Change.org aimed at distributing seized food to the needy has gathered over 350,000 signatures. The petition was addressed to President Vladimir Putin, Prime Minister Dmitri Medvedev, and the leaders of Russia's parliamentary fractions.

Only 20% of Sanctioned Goods Intercepted at Russian Border – Watchdog
Earlier this month, Presidential Press Secretary Dmitri Peskov noted that Putin would be kept informed of the results of the petition, but added that the authenticity of the signatures has yet to be verified. Moreover, Peskov stressed that the publicized destruction of food products would be aimed at maintaining the effectiveness of Russia's countersanctions, and most importantly, at ensuring that the questionable foodstuffs without proper certification would not damage Russians' health.

The presidential decree approving the decision to destroy confiscated embargoed foodstuffs stepped into force on August 6, following reports questioning the effectiveness of Russia's ban on the import of several categories of food products from the European Union, the United States, Canada, Australia and Norway, introduced in August of last year. The measure has served as Russia's response to several rounds of anti-Russian sanctions introduced earlier by these countries over Russia's alleged involvement in the ongoing civil war in Ukraine. In June, the Russian government decided to extend the embargo until August 2016, in response to the extension of EU sanctions.